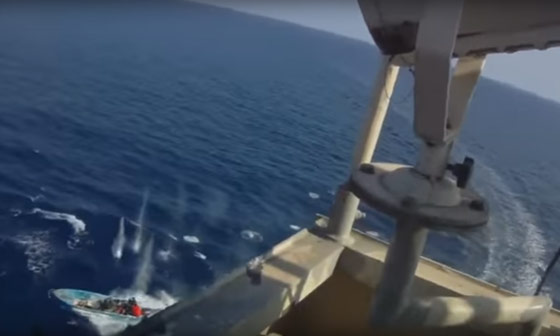 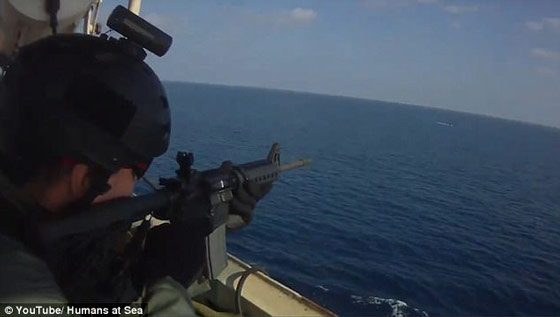 Following the highjacking of a cargo ship near the coast of Somalia in April of 2009, ocean transport companies began taking the threat of modern day pirates seriously. For years Somali pirates were able to easily board ships and hold their crew for ransom, at times even going so far as to torture or kill hostages until their demands were met.

But it looks like the pirate business has gotten significantly more dangerous for maritime criminals who are often under-equipped and travelling in speed boats.

As the following series of videos shows, U.S. security contractors are prepared to take rapid and deadly action when being pursued or engaged on the high seas:

One guard begins by firing warning shots around the boat which can be seen landing just feet away from the speedboat.

After firing dozens of rounds at the speedboat which crashes into the ship’s hull, one contractor can be heard shouting: ‘Where they at, what’s their position?’

As one speedboat careers off in retreat security can be heard calling: ‘Second skip coming in.’

A second boat races towards the starboard of the ship.

In the first video, security contractors initially fire warning shots at an approaching ship. The initial volley of firepower doesn’t seem to slow the pirates down, however, leading to a barrage of bullets:

In the second video, shot from various angles, we see the contractors engage a second pirate vessel (skip to about 0:45 for new footage):

According to common maritime law, a ship that is engaged in international waters may defend itself through force when confronted by armed pirates:

Private security teams patrol the decks of around 40% of large vessels in the “high-risk area” that stretches from the Persian Gulf to the Seychelles in the south and the Maldives in the east. When pirates attack, these armed guards respond with flares or warning shots. This usually scares off assailants (or sends them in search of easier prey). If it fails, they fire at an attacking boat’s engine, before finally turning their sights on the pirates. No ship carrying armed guards has so far been hijacked.

Should your emergency evacuation and preparedness plan involve heading to the high seas to get out of Dodge and you are ever threatened by hijackers on the open seas, shoot first and ask questions later.

Prepping to Survive: The Nautical Series Pt. 1: The Bug Out Boat

Prepping to Survive: The Nautical Series Pt. 2: Harbors of Healing

Prepping to Survive: The Nautical Series Pt. 6: When the SHTF – Gardening Afloat