Doug Casey Warns: “It’s The Next Stage Of The Greater Depression… The Economy Is Going To Be Very, Very Bad” 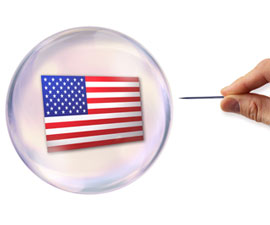 While President Obama took credit this weekend for saving the world economy from a global depression and stock markets are hovering around all-time highs, not everyone is convinced that central bank policy and government involvement in financial markets has stabilized the system. Doug Casey, one of the most well respected institutional investors in the world and someone who thrives in environments plagued with volatility and risk, joins Future Money Trends to explain exactly why the world has not avoided a Greater Depression and how things are about to get “very, very bad.”

And by very bad he means that centrally manufactured super-bubbles and bubbles are set to wipe out trillions.

You’ve got to remember that all of these governments and central banks all around the world have driven interest rates not just to zero, but to negative levels in some cases… and they are simultaneously printing up trillions of currency units. And even while they are desperately doing that the economy is falling apart in lots of different ways.

…They’ve created a super-bubble in bonds, a bubble in stocks, and meanwhile commodities have collapsed and are below production costs in many cases.

…The economy is going to be very, very bad… It’s the next stage of what I call the Greater Depression.

But as centrally manufactured bubbles burst in one sector of the economy, says Casey, capital will flow en masse to other sectors as investors panic. First to safe haven assets like gold, and then to to broader commodities which have been left for dead since the start of the decade:

Commodities, despite the fact that the economy is going to be bad, I think are headed up at this point because they’re the only cheap thing in the world and that’s where a lot of this excess money is going to flow.

And the excess money is going to flow rapidly. As Casey notes, while there may be panic selling in some parts of the economy, there will be panic buying elsewhere:

I’m extremely bullish on gold because it bears emphasis… gold is the only financial asset that is not simultaneously somebody else’s liability and all of these paper currencies all over the world are going to go to their intrinsic value, which is essentially zero.

What these central banks and governments are doing is incredibly irresponsible and stupid, printing these currency units up by the trillions… so there’s going to be a panic into gold.

As part of that you’re going to find China, maybe Russia, are going to go to a gold-backed Yuan and gold backed Ruble because they want to dethrone the U.S. dollar as the world’s premier currency… Well, the U.S. government is going to do it because of its incredibly foolish policies.

As you might expect, Casey’s focus is on the assets no one else has been interested in during the run up in broader stock markets. And like the Chinese government he’s been acquiring major stakes in commodity producers, including one particular gold mining company:

…I think this is the best part of the market to be in.

On America’s political future, Casey, a self avowed anarchist and anti-establishment proponent, says he supports Trump because he’s the only one in the field who is not a professional politician and perhaps the only one who can change the system as it exists today for the better:

Yes, he says a lot of stupid things… but all of these people say incredibly stupid things… Regardless of the persona he’s projecting at the moment to get attention, I think he’s much more intelligent and much more responsible than any of the people running. I think he’s definitely going to be the Republican candidate unless he’s actively defrauded… and I think he’s going to win regardless of whether Hillary is the democratic candidate or not… Hopefully she’ll be indicted for one or more of her numerous crimes before that happens.

I’m putting my money on Trump for winning the election. Not my ideal choice, but by far the best choice that we have.

I believe politics is the problem and not the solution… I support Trump and hope he wins… Remember, we’re going into the Greater Depression… he’s certainly better than anybody else that’s out there at the moment.

But the legendary International Man isn’t just putting all his eggs in one basket in the hopes of a Trump victory or some sort of magical solution to the problems the United States faces. Casey says you need to diversify in these times of uncertainty, and not just with your financial portfolio:

For more interviews, breaking documentaries and financial news visit Future Money Trends. To learn what investors like Doug Casey are doing to diversify their portfolios as we enter the next stage of the Greater Depression click here.