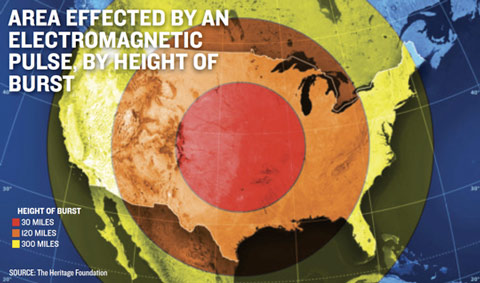 Editor’s Comment: As regular readers on SHTF know, the threat of an electromagnetic pulse (EMP) attack is quickly rising among the contingencies for war and major catastrophic disaster. Washington is fully aware of what may well be inevitable, and has taken precaution to guard the continuity of the Pentagon and establishment. But the general population is almost completely unprepared for this disaster, which may have origins in a natural solar flare, a nuclear attack by an enemy or a false flag from within.

Either way, there are some basic steps ordinary people can take, such as building a Faraday cage and safeguarding back-up equipment. Preppers can ready a low-tech survival strategy, and should, as the cities and urban population will absolutely crumble into chaos, and many predictions see the possibility that 90% of the population would die as a result of being cut off from modern services upon which they completely rely. Don’t be one of them.

90% of U.S. population could be wiped out with doomsday electromagnetic weapon … Pentagon woefully unprepared

There is growing alarm among defense planners about the uptick in nuclear weapons development taking place among the various great powers, including the United States, Russia, India and China, as well as lesser powers like North Korea and Pakistan. Missile defense is, in part, to some degree designed to mitigate the threat of a nuclear attack via ICBM.

But the Pentagon is dreadfully unprepared for the fallout from an electromagnetic pulse, generated either from a nuclear explosion over our country, or from an EMP created by a giant solar flare, for which there is no defense, the UK’s Daily Mail reported.

What’s more, the U.S. is not only lagging behind in terms of defending itself against EMP weapons, it is behind in the development of its own design – though Boeing is at least one American defense contractor working on a prototype, the paper said in online editions.

However, the Daily Mail noted that some have suggested that 90 percent of the U.S. population would perish over the course of the weeks and months following a major EMP event that crippled or wiped out the bulk of the nation’s power grid.

But other developed countries’ populations would likely suffer similar levels of casualties if their grids were destroyed as well, which is what makes the development of U.S. EMP weapons such a vital deterrent. In fact, a recent report from The Center for Strategic and Budgetary Assessments says that the technology is “one of the most critical operational domains in modern warfare.” The U.S., however, has “unfortunately … failed to keep pace” in that battlespace “over the last generation,” it added.

Titled, Winning the Airwaves: Regaining America’s Dominance in the Electromagnetic Spectrum, the report adds that the technology will eventually be as revolutionary as smartphones.

“In the same way that smartphones and the Internet are redefining how the world shares, shops, learns, and works, the development and fielding of advanced sensors and networking technologies will enable militaries to gain significant new advantages over competitors that fail to keep pace,” the report says.

Its release follows claims made recently by tech boss and presidential candidate John McAfee, who warned that a “doomsday” electronic weapon would kill 90 percent of Americans, as he urged politicians to consider it the No. 1 threat to the country.

“Experts agree that an all out cyber attack, beginning with an EMP (electromagnetic pulse) attack on our electronic infrastructure, would wipe out 90% of the human population of this country within two years of the attack,” he said in a commentary for the International Business Times. “That means the death of 270 million people within 24 months after the attack.”

As partner site Bugout.news reported Oct. 30, U.S. experts say that the technology exists to protect American grid systems from EMP attack, but that “politics” is preventing the proper measures from being adopted.

We don’t have to remain behind the curve

“The problem is not the technology,” said expert Peter V. Pry, the executive director of the Task Force on National and Homeland Security, and director of the U.S. Nuclear Strategy Forum, as reported by the website. “We know how to protect against it. It’s not the money, it doesn’t cost that much. The problem is the politics. It always seems to be the politics that gets in the way.”

And Cyberwar.news, another partner site, reported that other experts and analysts agree, including TV news anchor Ted Koppel. He predicts “cybergeddon” in his new book – Lights Out: A Cyberattack, A Nation Unprepared, Surviving the Aftermath – if mass damage is done to the nation’s power grid and other infrastructure.

“Imagine a blackout lasting not days, but weeks or months. Tens of millions of people over several states are affected,” said one description of the book. “For those without access to a generator, there is no running water, no sewage, no refrigeration or light. Food and medical supplies are dwindling. Devices we rely on have gone dark. Banks no longer function, looting is widespread, and law and order are being tested as never before.”

As Pry noted, the Center for Strategic and Budgetary Assessments report also states that the U.S. has the technology to get out in front of similar EMP weapons development.

“DoD [Department of Defense] now has the opportunity to develop new operational concepts and technologies that will allow it to ‘leap ahead’ of its competitors and create enduring advantages in EMS warfare,” the report said.