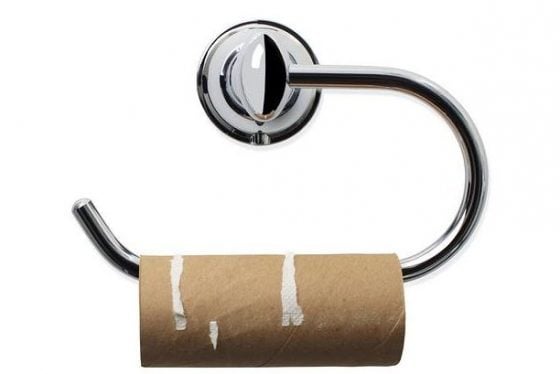 Did you ever imagine that you would see the day when police are being called out to protect trucks that are unloading shipments of toilet paper?  Well, in California this is actually happening.  At the Costco in Santa Maria, California police were seen guarding a truck as it unloaded a shipment of toilet paper on Saturday.

Thanks to the tremendous fear that the coronavirus pandemic is creating, toilet paper has become one of the hottest commodities in America all of a sudden.  Many retailers have already started to limit the amount of toilet paper that each customer can purchase, and shortages are becoming increasingly common.

So what should you do if you run out of toilet paper and can’t get anymore?

Well, apparently some people in Oregon have been calling 9-1-1 to voice their concerns.  The Newport Oregon Police Department posted the following message on their Facebook page two days ago…

It’s hard to believe that we even have to post this. Do not call 9-1-1 just because you ran out of toilet paper. You will survive without our assistance.

In fact, history offers many other options for you in your time of need if you cannot find a roll of your favorite soft, ultra plush two-ply citrus scented tissue.

Mayans used corn cobs. Colonial Americans also used the core of the cob. Farmers not only used corn cobs, but used pages from the Farmers Almanac. Many Americans took advantage of the numerous pages torn from free catalogs such as Sears and Roebuck. The Sears Christmas catalog, four times thicker than the normal catalog, could get a family of three wiped clean from December through Valentine’s Day; or Saint Patrick’s Day if they were frugal.

Then, of course, there are always alternatives to toilet paper. Grocery receipts, newspaper, cloth rags, lace, cotton balls, and that empty toilet paper roll sitting on the holder right now. Plus, there are a variety of leaves you can safely use. Mother Earth News magazine will even tell you how to make your own wipes using fifteen different leaves. When all else fails, you have magazine pages. Start saving those catalogs you get in the mail that you usually toss into the recycle bin. Be resourceful. Be patient. There is a TP shortage. This too shall pass. Just don’t call 9-1-1. We cannot bring you toilet paper.

I am glad that they approached this “crisis” with a sense of humor, but the reality of the matter is that this is starting to become a full-blown national problem.

At this point, even Amazon is having a very difficult time finding enough toilet paper…

Those toilet paper and water shortages at your local markets and big-box retailers have affected Amazon, as well.

The company said over the weekend that it, too, is out of stock on many items, “especially in household staples categories,” and is working “around the clock” and bringing on “additional capacity” to deliver orders.

Ultimately, toilet paper is not essential for survival, and we could do just fine without out.

But what will happen if this pandemic stretches on for many more months and national food supplies start getting really tight?

Let us hope that we don’t get to that point any time soon because it would spark nationwide panic on a scale that is absolutely unprecedented.

Sadly, most Americans could not last very long on what they currently have stored up in their homes.  If we have to go through an extended national lockdown like we have already seen in China or Italy, a lot of the exact same people that mocked us for “preparing” are going to find themselves in a very precarious position.

And in some areas, a lockdown has already occurred.  In fact, more than 6 million residents of northern California have now been ordered to “shelter in place”…

Six Bay Area counties announced a “shelter in place” order for all residents on Monday — the strictest measure of its kind yet in the continental United States — directing everyone to stay inside their homes and away from others as much as possible for the next three weeks as public health officials desperately try to curb the rapid spread of coronavirus across the region.

Most Bay Area residents will be just fine for a few days.

But what happens if this “shelter in place” order lasts for several months?

Over on the east coast, New York City has not been locked down yet, but the latest measures are a big step in that direction…

The city that never sleeps has been forced to shut down its bars, restaurants, movie theaters and gyms, including those in New York City’s iconic Times Square, in a bid to curb the spread of the novel coronavirus.

Photos of one of the most famous tourist attractions in the Big Apple show a relatively quiet scene with only a handful of people walking under Times Square’s bright lights on Monday.

The state of New York now has the most confirmed cases in the entire nation, and if this outbreak continues to spread wildly it is just a matter of time before a total lockdown is instituted.

At this point, the United States is on the exact same trajectory as Italy.  If this continues, the same things that are happening there will start happening here.

In the northern portion of the country, the death toll is becoming truly frightening.  In fact, we just learned that six Catholic priests have died from the virus in the city of Bergamo alone…

At the heart of the European coronavirus crisis in northern Italy’s city of Bergamo, six Catholic priests have died during the past week from the disease and, as of Sunday, over 20 priests were hospitalized.

Anyone that has to deal with the public is going to be at great risk during this pandemic, and so it is vital not to underestimate the deadliness of this virus.

Just a few weeks ago there were zero cases in Bergamo, but now the city’s crematory has so many dead bodies it is unable to keep up…

An Italian mayor says that his city’s crematory is now “unable to dispose of all the work it has to do,” as there have been so many bodies of those who have died due to the coronavirus.

Giorgio Gori — the mayor of Bergamo, Italy — says that it is no longer only the hospitals that are in a state of emergency but also the crematorium responsible for managing the bodies, according to a report by Il Giornale.

Doesn’t that sound eerily similar to what happened in Wuhan?

If we don’t get this outbreak under control somehow, the same thing will eventually happen in the United States too.

But most Americans still seem to believe that this virus is not a serious threat to them personally.  In fact, a brand new survey discovered that only 19 percent of Americans expect to catch COVID-19…

The survey of 502 people at least 18 years old shows that fear and panic doesn’t seem to be completely overtaking most households, but plenty of Americans are worried. In all, 19% of respondents think they’ll be diagnosed with coronavirus at some point.

Interestingly, nearly one in ten (9%) people went as far to admit they believe they have coronavirus right now.

Meanwhile, Goldman Sachs is projecting that half the U.S. population will eventually become infected.

A lot of people that are not taking this seriously will eventually get sick and die.

And this is especially true for those that are openly mocking this pandemic.  Right now, “the coronavirus challenge” is getting a lot of attention on social media for all the wrong reasons.

As a part of this challenge, people are literally licking toilet seats and doorknobs…

There’s a brand new challenge introduced on TikTok where people are licking everyday items that are often for public use.

Yes, these include toilet seats and doorknobs.

How unbelievably stupid do you have to be to do something like that?

Unfortunately, this is yet another perfect example of how far our society has degenerated.

We have literally become an “idiocracy”, and we are sitting ducks for a deadly virus that is not going to show us any mercy whatsoever.