Dissolving Micro-Chip Will Tell Big Brother Your Every Move 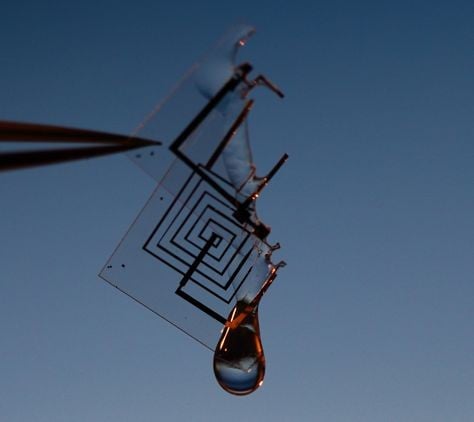 John Rogers PhD and his team work out of the University of Illinois at Urbana-Champaign. They, along with other teams at Tufts are developing transient electronics, tiny micro-thin chips that dissolve when they have served their purpose.

On April 8th this year their research paper was presented to the American Chemical Society at their annual National meeting, this year it was held in New Orleans.

Rogers spoke eloquently of the technology, explaining its possible use and exactly how the chips work. There was nothing negative at all in the presentation. Nothing was mentioned about the possible negative uses of such technology.

In a nutshell, micro-thin, soluble electronic chips are implanted into an equally thin medium that is also soluble. The amount of ‘wrapping’ around the chip denotes how fast it will dissolve. Once the final encapsulation layer has dissolved, the chip,within an hour, does the same, leaving no trace behind. There’s nothing at all to indicate it was ever there in the first place.

Rogers said during his presentation:

“…many new opportunities open up once you start thinking about electronics that could disappear in a controlled and programmable way.”

The good doctor highlighted some areas he feels transient electronics could be useful. Cell phones that cease to work at a given, pre-ordained date when you would have to buy an updated phone. Water sensors that would not need to be collected after submitting their data. Medical implants that were not required for life would just fade away to save further surgery to retrieve them.

He also briefed the audience on piezoelectric transient electronics. These are like tiny generators that produce electricity without an outside source, their zinc-oxide components make them work purely by muscle power, possibly making them the pacemaker of the future.

What was not said was that these tiny electronic devices are small enough to be injected and implanted without the recipient noticing. They can, as Rogers admitted, be placed in cell phones at the time of manufacture or at any point thereafter. It seems logical to assume that they could also be put into computers, cars, flashlights or any other object you care to think of.

How about babies? That would be relatively easy.

Children could be traced, tracked and followed from cradle to grave…how convenient.

Shop lifters could be transiently tagged so the ‘monitors’ would know if they went near forbidden stores.

Hell, we could self-destruct terrorists…or anyone else that happened to be inconvenient if we laced the inner wrappers with cyanide. Agenda 21 made easy.

How about implanting people so if they overeat, smoke or take drugs, the chips dissolve and eliminate the  problem? Far less people would need medical insurance.

I think the chances of transient electronics being used purely for the good of mankind is zero. The possibilities for this technology are huge and extremely wide ranging and there is no reason to think that governments won’t use it.

At the end of his presentation Rogers thanked the benefactors that had provided research grants:

The Airforce Office Of Scientific Research

The US Department Of Energy

The National Institute Of Biomedical Imaging and Engineering

The National Institute Of Health

Not a lot more to say really is there?

Chris Carrington is a writer, researcher and lecturer with a background in science, technology and environmental studies. Chris is an editor for The Daily Sheeple. Wake the flock up!