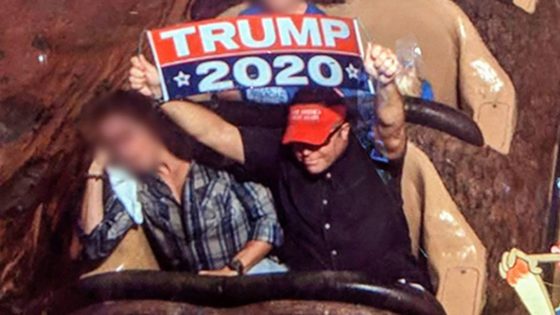 Disney World has banned a man after he held up a sign in support of president Donald Trump’s 2020 campaign on the infamous Splash Mountain. Disney World banned the man for breaking their rule against displaying signs or banners in the park.

Dion Cini shared a photo of himself on the social media platform, Facebook.  He was on Splash Mountain at Disney World with a large Trump 2020 banner along with a note from the Orange County Sheriff’s Office saying he would no longer be allowed on the property, according to a Fox 35 report.

Cini, who is well-known for leaving Trump banners and flags in various public locations (a practice he’s dubbed “Operation Flag Drop” on his Facebook page) also pulled a similar stunt in September at the “The Most Magical Place On Earth,” when he was banned for waving a Trump 2020 banner over the Main Street Train Station. The park allowed him to come back after the incident, according to a report by Fox News.

But, this may be Cini’s last time setting foot on Disney properties. “Trespassed from all of Walt Disney World (WDW) properties to include, but not limited to, Theme Parks, Water Parks Resorts, and Disney Springs. Conduct not welcome on WDW Property,” the note from the Sheriff’s office read. And, according to Disney World’s website, Cini was partaking in one of the park’s “prohibited activities,” which includes “unauthorized events, demonstrations or speeches, or the usage of any flag, banner or sign for commercial purposes, or to incite a crowd.”

A spokesperson for Disney World confirmed Cini’s ban has “has nothing to do with politics or content of the banner.” It isn’t censorship, Cini broke their rules.  “Walt Disney World welcomes all Guests to enjoy our parks; however, demonstrations and the display of signs and banners is not permitted on the premises.  We have previously reminded this guest about our rules,” the spokesperson told Fox News.

Cini’s Facebook post sparked a slew of different reactions and opinions across the political spectrum.  Many people stated accurately that the ban has nothing to do with his political affiliation and that it’s about following the rules to maintain a “safe environment.” Others claim Disney banned Cini because the banner was pro-Trump.