Did This Police Surveillance Camera Capture A Ghost Walking Through A Highly Secured Area? 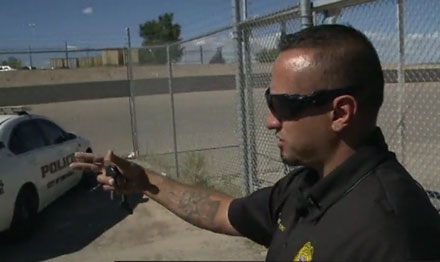 When people have a run in with ghosts they will often pick up the phone and call police. But who you gonna’ call when it’s the police who face an encounter from “the other side?”

Officer Karl Romero was watching the surveillance cams one night at the Espanola police station in New Mexico when he saw a figure of a silhouette walking through a highly secured area of the property.

“At first I thought it was a podilla, a fly or moth, then I saw the legs and it was a human.”

According to detectives at the department, there is no way in or out of the secure facility without the gates being open or an alarm sounding. Of course, an enterprising prowler or hacker could probably figure out a way to disable or bypass the security system.

But, as you’ll see in the video, the ‘ghost’ actually  walked through the fence itself, lending more credibility to the notion that it could be otherworldly.

According to investigators, what was captured on camera was not a lighting issue or technical glitch of any kind.

Officers have reported other spooky encounters at the station in the past, including heavy breathing down their necks when no one was present, unexplainable images in the lobby, and noises.

What do you think? Has this police video, investigated by official sources, proven once and for all that ghosts really do exist?

And just because we know you want to sing it right now: