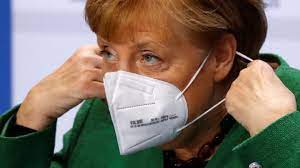 Germany’s dictator Angela Merkel has decided not to enforce her draconian lockdowns on the public after widespread backlash and disobedience. Merkel is facing widespread resistance to her tyranny.

This is one good piece of news for humanity.  If we stand together and oppose humans thinking they own other humans, we can beat this draconian beast system set up to turn this place into a slave planet. Some in the ruling class now know that they are outnumbered and hopefully, that means their days as masters are also numbered.

In a video call on Wednesday, Merkel told state premiers that she was dropping the five-day lockdown, which would have closed all businesses, with supermarkets only permitted to operate for one day during the period.

The planned restrictions also prohibited private gatherings of more than five adults from two different households and called for Easter church services to be conducted virtually.

“This mistake is my mistake alone,” Merkel said, adding that the shutdown was “created with the best of intentions” but should not have been proposed because there was no way to properly implement it. –RT

Merkle even admits that the state does not have enough violence enforcers to keep people from being free. If 8 billion human beings decided to no longer be slaves to their rulers, they would not be.

Merkel had billed the five-day lockdown as a necessary step to prevent a third wave of the virus from spreading according to reports. France has already imposed lockdowns in several regions in response to a surge of new cases. Power-hungry politicians will stop at nothing to make sure we believe we have to comply with their ridiculous edicts. This is why government is slavery and can be nothing more. If anyone else has a higher claim over your life (kidnapping you for obeying their commands) or property (stealing the product of your labor, aka, taxation) then you are not free.

It’s good to see so many finally coming to this conclusion. It is time we all wake up and start living as the free humans we were born to be and stop allowing others any power over anyone for any reason. The great awakening is here and many have figured it out.

Democide: Governments Killed Over 260 Million in the 20th Century, Poised to Kill Billions More in the 21st