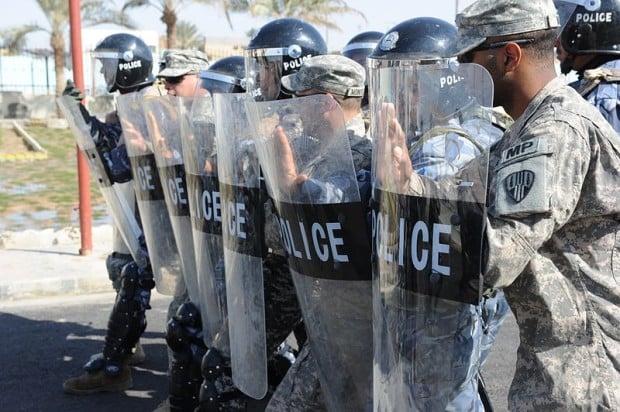 The Department of Homeland Security has denied that it is preparing for domestic unrest despite the purchase of riot gear and the hiring of armed guards which the federal agency freely admits are for “riot control situations” and “civil disturbances”.

Responding to an inquiry by the International Business Times regarding the recent purchase of riot control equipment, pepper spray launchers, pepper spray projectiles, as well as the hiring of armed guards to protect government buildings, the DHS dismissed reports (primarily from Infowars) that such activity was related to preparations for domestic disorder.

“These reports are false. The referenced Federal Protective Service (FPS) acquisition request for Protective Security Officers will replace an existing contract due to expire November 2014, which provides security and screening within federal facilities throughout upstate New York,” DHS spokesman S.Y. Lee said in the statement. “This routine acquisition planning is not in response to, or anticipation of, any potential situation.”

However, that’s the opposite of what the solicitation that accompanied the hiring of the armed guards actually stated. Indeed, two of the ‘potential situations’ listed by the DHS itself as to why they were hiring armed guards to protect government buildings were “public demonstration(s)” and “civil disturbances”.

Lee also told the IBT that Homeland Security’s recent purchase of pepper spray launchers and pepper spray projectiles was for “training purposes” only, adding, “The reports about the Department of Homeland Security preparing for any extraordinary situation or domestic unrest are unequivocally false.”

If the pepper spray projectiles were for training purposes only, then why did the federal agency purchase 120,000 live projectiles in addition to 117,000 training projectiles?

Furthermore, when the federal agency purchased riot gear back in June, the DHS itself again admitted that the equipment was for “riot control situations.”

Why is the DHS denying in public media statements what it freely admits within the pages of its own contract solicitations?

Whether America is set to be hit by domestic unrest or not, the fact is that Homeland Security is preparing for that outcome. That’s not Infowars.com making such a claim – the DHS itself admits it in their own documents.

These questions were not asked by the International Business Times’ Connor Adams Sheets, who also characterized the DHS’ bid to “quash dissent, monitor public events, and infiltrate peaceful protest groups,” as a “conspiracy theory,” despite the fact that the federal agency has admittedly spied on and infiltrated peaceful advocacy groups since at least 2006, according to the ACLU.

The issue of why the DHS is now hiring an armed domestic security force in Minnesota and Wisconsin which is required to have a “Top Secret” security clearance was also not explored.

Just as with the DHS’ ammunition buying controversy, which again in this piece is erroneously dismissed as bulk buying to save money, an explanation we debunked months ago, the mainstream media seems to think that potential government malfeasance can easily be dismissed by merely reprinting the glib statements of government officials without any scrutiny whatsoever.