Denninger: “Wake Up America Before You Get Shot… And Possibly (Yes, Literally) Eaten” 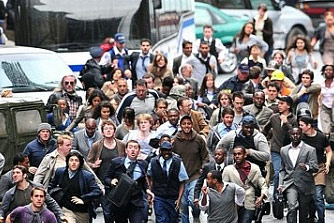 America’s debt problems aren’t going away. In fact, they will continue to get worse. Karl Denninger recently cited a Bloomberg report to make his point at the Market Ticker:

Driven by higher interest costs, Social Security and Medicare for baby boomers, as well as tax cuts made permanent in 2012, the federal debt held by the public is expected to hit $40 trillion in 2035, according to calculations by the Committee for a Responsible Federal Budget based on Congressional Budget Office estimates. Back in 2009, soon after President Barack Obama took office, the forecast for the 2035 burden was at least $7 trillion lower.

You thought $18 trillion in debt was bad and enough to lead to a collapse? How about more than twice that?

As Denninger explains, the government will be spending four times more 20 – 30 years from now just to keep things running. But we’ll never actually make it that far because the system will collapse in on itself well before then:

You have to look at the second graph in this post.  There’s a decimal missing but even so, if you think the federal government will be able to spend north of $17 trillion, which is more than 400% what it spends today by 2045, you’re nuts.

Let me make a clean prediction: Long before we get to the point where the federal government manages to spend 4x as much as it spends today fully half of the population will be literally starving to death and will turn violent.  It is not that there “might” be a revolution or civil war long before that level of spending comes to pass, it is a certainty that one or both of those events will occur.  Indeed, even those who are the “nominally” rich right now (top 10%) have utterly no means of keeping pace with this projection, should it prove up — and thus it won’t.

Now that view, incidentally, is what the predicate for your pension fund and your retirement are based on, assuming you are going to live another 30 or more years.  That is, assuming you’re younger than 55 right now you’re going to get to either live this and will probably die in said violence or you had damn well better put a stop to it RIGHT NOW.

Let’s be very clear. Though we understand a solution is necessary to prevent national disaster, the current trends suggest that no such solution will ever be presented, let alone implemented.

That means we can fully expect a complete meltdown of the credit worthiness of the United States and a massive detonation of the debt bubble we’ve created.

Greg Mannarino recently warned that millions upon millions of people will die when the bubble bursts. This is what he was talking about.

Stopping it means a cessation, now, of all deficit spending.  Period.  Not tomorrow, not the lying Ryan 20 year projections, now.  And there is exactly one way we can do that in this country, and that’s to get rid of Medicare and Medicaid entirely for all but the very poorest Americans.

NOTHING ELSE WILL WORK; IT CAN’T, MATHEMATICALLY.

THIS IS THE ONLY WORKABLE OPTION.

It’s that simple folks; this projection by the government is not going to play out, and thus it won’t.  Worse, once the markets figure out that this is what’s actually on the table you’ll be lucky if the S&P trades at 200 — not 2,000+ — as every asset class will get utterly decimated.

WAKE UP AMERICA BEFORE YOU GET SHOT — AND POSSIBLY (YES, LITERALLY) EATEN.

What it will boil down to is a battle for resources. As the debt bubble bursts and lenders are no longer willing to issue credit the regular flow of commerce as we experience it today will cease to function.

This will cause disruptions in everything, including food and energy delivery. This is not mere speculation, but fact. And we have already seen such consequences play out in Greece where food and medicine became unattainable following their collapse. The entire country almost fell into black out at one point because the government couldn’t pay its electric bill and no one wanted to lend it money to do so.

Luckily Greece had a fallback – the European Union and the International Monetary Fund.

For the United States, no such emergency financial response will be available, which means hundreds of millions of people will have no way of acquiring the resources they desperately need to survive.

Should that come to pass it is not at all out of the question to suggest that people will turn to cannibalism to meet their protein demands. It was recently reported that in Nigeria, where meat is scarce, a restaurant was actually selling human flesh for lunch and dinner. Trash bags with severed heads and human body parts were found in the kitchen.

As disgusting and horrific as that is, the reality is that some people will do whatever it takes to survive.

The following video is disturbing and extremely graphic, but is necessary to get the point across.

One day, should we continue along this path, this may be America’s reality:

The Other Preppers: “We Are Your Worst Nightmare and We Are Coming…”

Critical SHTF Security Video: You Are A High Value Target