Democrat: Trump Should Resign Or Congress Should Take Action 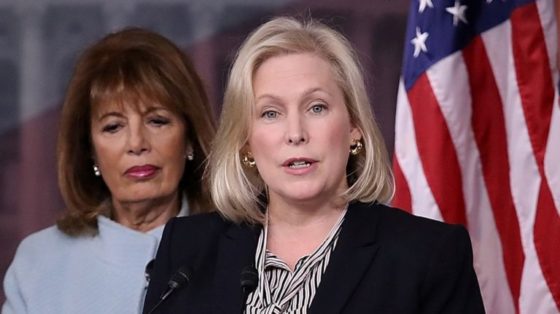 Democrat Kirsten Gillibrand, a Senator from New York, claims that president Donald Trump should resign. She also said if he refused to do so, Congress should “hold him accountable.”

Gillibrand believes Congress should hold President Trump accountable for the numerous allegations (‘allegations’ being the key word here) of sexual misconduct leveled against him. “I think he should resign, and if he’s unwilling to do that, which is what I assume, then Congress should hold him accountable. We’re obligated to have hearings,” Gillibrand said in an interview with CBS’s 60 Minutes.

One of the Bloom clients who DID receive financial help in exchange for her allegations against Trump was New York City makeup artist Jill Harth who herself defended the revelations while claiming that the money had nothing to do with her coming forward in the first place. -SHTFPlan

If Trump does not resign, the senators and some of Trump’s accusers said Congress should investigate the claims of sexual assault. When asked on 60 Minutes by the leftist media, why it took until late last year to call for Trump to be held accountable, Gillibrand said “something changed” when he was elected, “and I think it changed for women.”

Trump went after Gillibrand on Twitter after she called for his resignation, saying she would “do anything” for campaign donations.

White House counselor Kellyanne Conway criticized Gillibrand on Sunday for protecting and defending former President Clinton when he was accused of sexual misconduct. Conway wasn’t the only woman seeing the hypocrisy behind the Democrats’ petty actions.  Gillibrand, who only recently said Bill Clinton should have resigned at the time of the Monica Lewinsky scandal, told 60 Minutes her perspective on the allegations against the former president has changed. “I think I’m not alone here. Like, how many of us were having this conversation even a year ago?” she said. “I think we’re all learning.”

She declined to say whether she’s spoken to the Clintons since she changed her stance, but added that Hillary Clinton is still her “greatest role model in politics.”