DEAR DONALD: “Gold Could Save Your PRESIDENCY!” 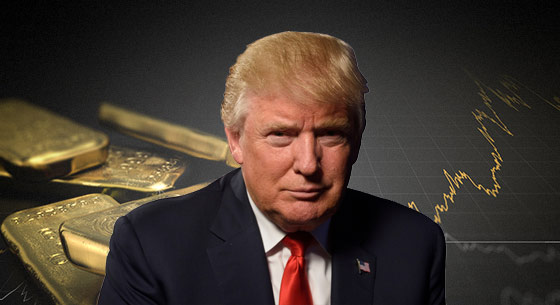 Donald J. Trump reportedly didn’t even have a victory speech ready on election eve in 2016. Crooked Hillary supposedly DIDN’T DRAFT a concession speech on her end. Halfway through the day, the big story was still going to be that America had its first female Commander in Chief, but towards the end, WINDS WERE BLOWING in the opposite direction.

Three weeks before the elections, this is what the New York Times published:

Not one mainstream media outlet DARED TO FORECAST a Trump win. It was almost unfathomable and I can still remember how shocking it was, JUST MOMENTS AFTER the official announcement, as the Trump family made their way down the stairs to celebrate the SHOCKING RESULT.

Trump’s first term has been FILLED WITH attempts to crush him openly and directly. We have never seen a more ridiculed and mocked leader of the free world – the media coverage is RUTHLESS and Donald is pounding back at them as well. Trump is either LOVED FANATICALLY by his supporters, who view his agenda as pro-nationalist and anti-globalist or is HATED LIKE THE DEVIL by the other half of the country.

When I was on an African safari in June 2019, I saw this firsthand. At our resort, only 10 rooms were built; it was a boutique vacation spot and dinners were served on a gorgeous wooden table that was capable of serving 30 people. It was the most exquisite piece of furniture I’ve ever seen. On one particular night, another guest began to express their hatred towards Donald while a Republican guest intervened and attempted to debate her.

The discussion HEATED UP within seconds, followed by an AWKWARD SILENCE, after which the lady Trump-hater excused herself.

I had never seen such a clear division of opinions, where each side was so convinced that the other party has NOTHING TO OFFER and there is no common ground and no compromises made.

The trust level between the camps is NEXT TO ZERO.

A couple of days ago, I saw this poll come out: 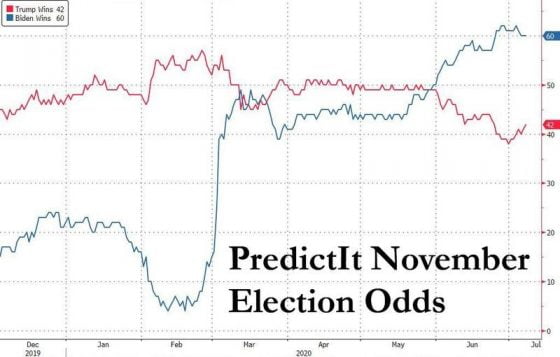 Let’s, for just a SPLIT SECOND, act as though it were true. In that case, Trump’s reelection hopes are virtually non-existent, while his opponent has chosen to implement a strategy of being quiet. The thesis is that Donald would UPSET AND AGGRAVATE so many voters that they would just choose “the other guy.”

Biden has just been keeping to himself all this time.

It is very true that when it comes to the average voter, they ask themselves ONE QUESTION before making a decision: AM I HAPPY with the way things are?

If the answer is “YES” or if the answer is that it is surely better than having the other party in charge, Americans would prefer the person they know compared with the one they’re UNSURE OF.

If the answer is “NO,” they will choose CHANGE!

Up until the coronavirus, America was mostly happy. Things weren’t great but the economy, which is Trump’s weapon, was fundamentally sound. That ISN’T THE CASE today!

Therefore, on September 1st, when the summer is over and the eyes of the whole world are focused on the EPIC DUEL between left and right, red and blue, Biden vs. Trump, we will see Democrats DRAG THEIR FEET on additional stimulus packages. That’s GUARANTEED!

Think about it: with stimulus checks DRYING UP, the real economy will reveal its face.

The recession will be visible for all to see.

Gold has OFFICIALLY ENTERED a stupendous bull market. The precious metal will soon be priced at over $2,000 for a single ounce.

Yesterday, a friend asked me what I would tell President Trump if I had his ear for 60 seconds.

Without hesitation, my answer was that the Trump administration should address the nation without any fear, LAYING OUT the naked truth, raw and unfiltered, without sugarcoating the genuine issues facing it.

America is SHYING AWAY from hard work. It is losing its vigor, its vitality, and its strength, which come from ITS UNITY around the ideas of progress, innovation, personal growth, and HARD WORK.

It is hooked on debt and credit. “Gold could save your presidency, Mr. President,” I would say. “Gold is the GREAT EQUALIZER.”

This country needs to go back to basics and REEDUCATE ITSELF on what is effective for it.
It won’t do it until it is tired of trying all the so-called shortcuts, but none will prevail.