Cover Up: “The Levels of Radiation In the Place Are Through the F*cking Roof” 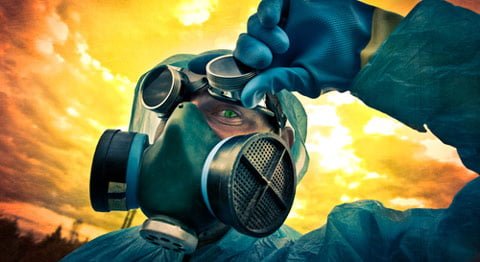 It’d be humorous if it weren’t such a tragedy.

In the spirit of saving money Japan’s power company Tepco has resorted to the ultimate jerry-rigging technique for stopping leaks in the pipes holding radioactive water at the Fukushima nuclear power plant.

A Japanese worker who spent six months at the Fukushima nuclear power plant says that he isn’t surprised about the latest radioactive leaks from the plant because of its shoddy construction and repair work, including the use of duct tape to “fix” key equipment.

Yoshitatsu Uechi, 48, told the Asahi Shimbun newspaper that he and his fellow workers were under such intense pressure to perform repairs as quickly as possible on the devastated plant that adhesive tape was used to “repair” critical equipment and that they even neglected to apply rust inhibitor on the radioactive water tanks.

“I couldn’t believe that such slipshod work was being done,” he said. “Even if it was part of stopgap measures.”

Back in Oct. 2012, Uechi and another worker climbed to the top of a storage tank holding radioactive water in order to bolt a steel lid over its opening.

When they reached the top, he noticed that the opening, one foot in diameter, was only covered with white adhesive tape and that the water level was less than two feet from below the opening.

He was given only four bolts to fasten the lid even though there were eight bolt holes in total.

When this disaster first happened we noted, to the vehement disagreement and calls of sensationalism from experts in the field, that Fukushima would be worse than Chernobyl.

We noted how radioactive plumes would make their way to the United States and increase radiation levels nationwide, as well as the adverse maritime effects to wildlife.

The media, of course, dismissed such notions as an overreaction and the U.S. government remained completely quiet, other than to suggest Americans stock up on Potassium Iodide (KI) as a protective measure to limit radioactive absorption in the human body. This sent the price of KI skyrocketing to over $200 per pack, an overnight rise of nearly 2000%.

Then the story just… disappeared.

If you were following mainstream news reports you’d think they fixed the problem. But the reality is that it has gotten much worse and three years on we are now seeing the effects manifest all over the country.

Sea life along the west coast is dying en masse. Radiation levels have risen and been detected in snow and rain across the midwestern United States and the Northeast. In San Francisco, Geiger counters go nuts as you move from the beach towards the water.

Watch Geiger Counter readings “go into alarm” as researcher approaches the beach. Health officials say they are “befuddled” as to the cause:

We’re even seeing higher radiations levels in Tuna fish and other seafood that’s being served up at local restaurants. And just recently 71 sailors who were sent to respond to the disaster in its early days have been diagnosed with cancer and radiation poisoning.

Here’s the scary version: They have no idea how to fix the problem, so the radiation leaks and water dumps will continue unabated. This could literally go on for decades.

Tepco is trying to save as much money as possible with no regard for human life. The Japanese government is pretending like everything is just fine and dandy. And the international community, including the U.S. government, has taken no steps whatsoever to involve themselves in the repair efforts.

It’s as if they don’t really care that millions of people are being exposed to significantly higher than normal radiation doses across our entire planet.

Meanwhile, as CEO Shane Smith of documentary firm and magazine VICE noted in a recent interview, “The levels of radiation in the place are through the f*cking roof.”

If you look at Fukushima, it’s an perfect example of the issue with nuclear power.

There’re a lot of stories now coming out that the Japanese government kept it under wraps, didn’t want to tell anybody. The food around the whole region was irradiated. People in Tokyo were showing increased signs, etc. etc. It’s going to be bad for quite some time. What do you expect?

In the interview Chef and restaurant owner Eddie Huang responded to a question about the clean up and why there’s been no progress.

His answer pretty much sums it up.