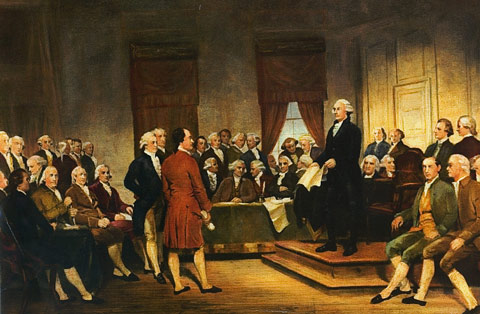 (Pictured: The Constitutional Convention of 1787)

Editor’s Note: As highlighted in the article below by Paul Joseph Watson of Infowars, Michigan may have just triggered a modern-day Constitutional Convention. Though it’s not yet clear if Michigan’s call for a convention pushes us over the threshold due to procedural issues associated with the applications of other states, at the very least our Federal Congress will now be forced to review the situation.

Our nation is broken, that should be clear. Our Founders left for us a  mechanism to fix it, and one of the most powerful is an Article V Constitutional Convention, which is designed specifically for the fifty states to initiate Constitutional changes outside of the purview of the federal government. The President of the United States, for example, will have absolutely no say in the matter and is unable to exercise veto power over Constitutional Amendments. The Federal Congress can do nothing more than oversee the Convention. And the Judicial Branch will have to abide by ANY and ALL ratified changes.

What this means is that should Congress determine that the 2/3 state (34 states) qualification has been met, then the States will propose and then vote on Amendments to the existing U.S. Constitution. Keep in mind that this could mean the addition of Amendments in the form of codicils (Like the amendments that followed the Bill of Rights), or the complete removal of existing amendments. This could go either direction – good or bad, as Paul points out with the Second Amendment. The Founders did take steps to ensure that all, or at least most, Americans supported any proposes changes by requiring 3/4 (38) states to ratify any changes.

This may be a welcome change for America at the present time. We’re sure our readers can think of scores of Amendments that would make America better. But, there is a flip side to that coin, and things could change for the worse should the States agree on changes that might, for example, “update” the Second or First amendments (or any of the others that are the pillars of American liberty).

Could U.S. Constitution Be Changed to Eliminate Second Amendment?
By Paul Joseph Watson

The entire U.S. Constitution could be up for review after Michigan became the 34th state to vote in favor of a Constitutional Convention, satisfying a rule that states America’s founding document can be amended if two thirds of state legislatures approve the measure.

Article V of the U.S. Constitution states that Congress “shall call a convention for proposing amendments” should the two thirds requirement be met, which it was last week when Michigan lawmakers endorsed the move.

Following the vote, California Republican Rep. Duncan Hunter called for a Constitutional Convention to be given the go ahead.

“Based on several reports and opinions, Michigan might be the 34th state to issue such a call and therefore presents the constitutionally-required number of states to begin the process of achieving a balanced budget amendment,” Hunter wrote.

While some would welcome the opportunity to amend the Constitution to institute fiscal conservatism, others fear the move could easily be hijacked to negate parts of the document that protect fundamental liberties, such as the right to bear arms and freedom of speech.

Former Supreme Court Justice John Paul Stevens recently called for ”improving” the Constitution by changing the second amendment so the right to bear arms only applied to those in a “militia” and not the general public at large.

“Nevertheless, in such a convention, the ENTIRE Constitution is subject to review and can be altered and changed. This could be everything from installing “social justice” to the dissolution of the federal government. Everything is on the table as if we were back in 1776 Philadelphia,” writes Martin Armstrong, adding that the Michigan vote represents an, “unprecedented event to amend the U.S. Constitution.”

Fox News’ Barnini Chakraborty notes that it is unclear whether the 34 state requirement has been met since some have rescinded their votes, but constitutional scholar Gregory Watson said there could be no take backs.