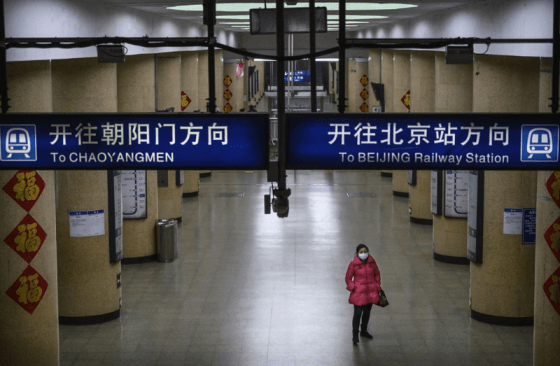 Update (1115ET): The 2 Iranians who reportedly tested positive for COVID-19 have died, according to several foreign media reports cited by Reuters.

As we reported earlier, a health ministry spokesperson said both cases were found and isolated in the city of Qom, where the two were treated in quarantine. Their conditions were said to be relatively stable earlier.

Experts worry that Iran might have dozens more undiagnosed cases by now, even as Iran has applied ‘safety measures’ like temperature screenings at its airports. That hasn’t exactly been found to be the most effective measure to stop those infected with the virus from slipping through.

Update (1025ET): Epoch Times’ Jennifer Zeng has shared some of the most startling videos gleaned from Chinese social media before the country’s censors can take them down.

And this latest one is no exception.

According to Zeng, the crowd of people depicted in the video are being herded into the “No. 2 Hospital of Wuhan Iron & Steel Corp” to be “re-educated” after they were caught walking the street without permission or an excuse.

Last night, people from Qingshan District in #Wuhan taken to No. 2 Hospital of Wuhan Iron & Steel Corp to be "educated" after being caught for walking on the street. What they shout is "Qingshan stay strong."
Click here for more: https://t.co/fSwmxEsPYp#COVID2019 #Coronavirus pic.twitter.com/aTjhRY7wBs

These draconian crackdowns are driving millions of Chinese bonkers as they’re confined largely to their homes. And all of it will be rendered insignificant as Japan unleashes a boat load of infected patients on Tokyo.

Meanwhile, the latest figures show that over 15,000 people around the world have now recovered from the virus. The recovery rate for Hubei is still below 15%, unfortunately, while the number for the outside world is 40%. Eight out of nine patients in the UK have recovered, while half of Thailand’s 35 cases have recovered.

In Thailand, nearly half of the 35 cases in the country have recovered. Earlier this week, the WHO said 4/5 of the cases in China were relatively mild and are expected to recover.

Elsewhere, Taiwan reported another confirmed case on Wednesday, its 24th confirmed infection: the victim was said to be a woman in  her 60s with no history of foreign travel. Just like in Japan, more cases are emerging where the source of the virus is baffling to authorities.

Update (0900ET): Following Russian newswire reports yesterday that the Kremlin would become the first country to completely ban all Chinese from entering the country and freeze all visas for Chinese applicants, the Russian Foreign Minister on Wednesday clarified that it will continue to issue some visas, with very strict guidelines.

Visas will continue to be issued for official, business, humanitarian and transit purposes, the foreign ministry said.

The ban will take effect Thursday at midnight Moscow Time.

The Foreign Minister added that the ban is temporary and only applies to visitors with tourist, private, student and work visas.

“We reiterate our willingness to continue close cooperation with China in order to efficiently eradicate this common threat.”

Russia has had three confirmed cases of the Covid-19 disease.

Beijing has made it known that it finds bans on Chinese travelers to be “racist”. Following the expulsion of 3 WSJ journalists over a ‘racist’ opinion column, we suspect the Russian embassy got an earful from their partners in Beijing.

Update (0845ET): As the G-20 meeting of finance ministers and central bank governors begins in Riyadh, the IMF has published an essay warning that newfound “uncertainties” brought about by the coronavirus could lead to a “long-lasting and more severe outbreak”.

In the lengthy piece, penned by IMF Managing Director Kristalina Georgieva, warns that after central banks around the world including the Fed cut rates 71 times last year, the biggest monetary boom since the global financial crisis has left the global economy in good shape.

Still, China presents a serious problem. If the virus is contained, the economic impact on the mainland will be short-lived, and the knock-on effects for the rest of the world, transmitted via disruptions to global supply chains, will be minimal.

But if Beijing can’t get a handle on this thing, well…

The coronavirus is our most pressing uncertainty: a global health emergency we did not anticipate in January. It is a stark reminder of how a fragile recovery could be threatened by unforeseen events. There are a number of scenarios, depending on how quickly the spread of the virus is contained. If the disruptions from the virus end quickly, we expect the Chinese economy to bounce back soon. The result would be a sharp drop in GDP growth in China in the first quarter of 2020, but only a small reduction for the entire year. Spillovers to other countries would remain relatively minor and short-lived, mostly through temporary supply chain disruptions, tourism, and travel restrictions.

However, a long-lasting and more severe outbreak would result in a sharper and more protracted growth slowdown in China. Its global impact would be amplified through more substantial supply chain disruptions and a more persistent drop in investor confidence, especially if the epidemic spreads beyond China.

The rest of the essay goes on to discuss a host of other global risk factors.

The implications are clear: Central banks response to the outbreak will inevitably be to ease more (a process that the PBOC has already started, and which the Bank of Korea is expected to join). Which means Davos 2021 will be all about central banks’ inability to rescue the global economy.

Tehran is not having a good year.

First, President Trump rang in the new decade by barbecuing the leader of the IRGC Quds Force. In response, Iran killed zero Americans but accidentally shot down a Ukrainian passenger plane, killing nearly 200 people, including dozens of Iranian students, then they tried to lie about it, before finally coming clean.

All that was probably enough to destabilize the regime on its own. Though it has quieted down somewhat, the public outrage is still simmering as Iran’s rolling economic crisis continues.

Now, on top of all that, Tehran has confirmed to the AP that authorities have confirmed two cases of the coronavirus in Iran. That means the virus has now infiltrated two of the world’s most isolated states – Iran and North Korea. Many outsiders believe North Korea has confirmed at least one case of the virus, but that it has withheld this information from the international community to avoid inciting a panic.

Like North Korea, Iran’s battered economy, crippled by years of American sanctions, is hardly equipped to deal with the outbreak. According to Iranian media, the cases were confirmed in the central province of Qom. More patients are being tested as an unknown number of suspected cases have been isolated, according to the AP.

Last night in New York, we reported that Japanese health authorities were preparing to release the first batch of 500 passengers and crew who had reportedly tested negative for the virus (though that doesn’t completely rule out the possibility that a few of them might still develop symptoms caused by COVID-19).

On Wednesday morning in the US (so Wednesday night in Japan), health officials revealed that 79 more people on board had tested positive for the virus, taking the total number of infected aboard the ship to 621, the AP reports.

As we’ve noted several times, the notion that thousands of people are about to be released while hundreds of cases of the virus are still being confirmed seems like insanity. While most of the patients will face two more weeks of quarantine when they return home, how are they planning on getting there? There’s been no word of official government transport. By allowing them to travel home, Japan is breaking the quarantine.

Britain has told passengers on board the ship not to disembark when Japan gives them the all-clear, instead advising them to stay put and wait for the UK to organize an evacuation flight later this week to minimize their odds of infecting others.

It seems like a particularly stupid thing to do when the Tokyo Olympics are coming up this summer.

After the virus death toll on the mainland hit 2,000 last night, Johns Hopkins reports that the number of confirmed cases and deaths haven’t moved since then: By their count, total confirmed stood at 75,201 while deaths stood at 2,012.

Last night, the CDC warned that Japan’s quarantine of the ‘Diamond Princess’ “may not have been sufficient” to prevent transmission among individuals on the ship.

In other slightly more positive cruise-ship related news, the Guardian reports that A total of 781 guests who disembarked from the Westerdam cruise ship in Cambodia have tested negative for Covid-19, according to Holland America, the ship’s operator. The final passengers left the ship on Wednesday.

As Beijing tries to reassure its population, half of which is under lockdown, that everything is going to be okay, Reuters reports that China’s central bank and its finance ministry won’t send any officials to a G-20 finance ministers and central bank governors meeting in Riyadh due to the Coronavirus outbreak.

Meanwhile, in Wuhan, the twin nightmares of the ‘wartime’ lockdown coupled with the ravages of the virus continue to work their wonders.

"Yesterday morning he was still able to speak…It’s all because of their delay!…How can I get through this without my dad?" A young girl cries on the street of #Wuhan over the death of her father. pic.twitter.com/O9xHB2q2GC

The yuan strengthened early Wednesday following reports that China is weighing measures including direct cash infusions and mergers to bail out the airline industry and others. Earlier, the state-directed Chinese banks to offer emergency loans to troubled companies. The South Korean government and central bank announced a similar plan earlier this week. Some of the measures including easing infection controls in certain manufacturing hubs to get production back online.

Optimism about China’s efforts to help companies hurt by the virus put US stocks on track for a solid gain at the open on Wednesday, potentially enough to send all three benchmark indexes to fresh record highs.

As we reported earlier, Beijing expelled 3 WSJ reporters on Wednesday over an opinion column published by the paper that Beijing decried as ‘racist’.

Remember, next time you hear somebody talking about the outbreak ‘slowing down’, take a look at this:

In corporate news, Puma and Adidas, which generate 1/3rd of revenues in the APac region, became the latest clothing brands to warn of disruption in their business in China as they have closed stores there. Puma sees a hit in Q1, while Adidas notes an 85% decline in business activity in the world’s second-biggest economy.