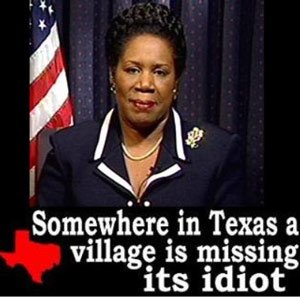 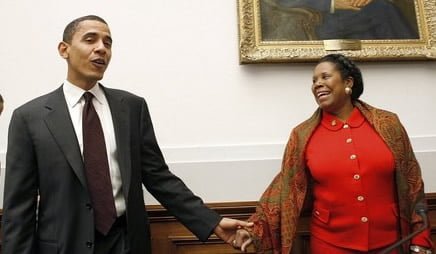 The Texas Congresswoman who once urged a Congressional oversight panel to study how Christian militants and other radicals might bring down the country has some new progressive ideas she’d like House members to begin implementing.

In a brief speech on the House floor about safety nets that touches on all manner of government assistance, Rep. Sheila Jackson Lee suggested that the term “welfare” is no longer politically correct, and like all masters of doublespeak, wants Congress to change its name to a “transitional living fund.”

Rep. Sheila Jackson Lee (D-Texas) hailed the war on poverty, endorsed government welfare programs, and said the “safety net has to be something for all of us.”

“Maybe the word welfare should be changed to something of, ‘a transitional living fund.’ For that is what it is — for people to be able to live,” she said.

She urged Congress to pass emergency unemployment insurance — “a transitional outreach to individuals who are chronically unemployed,” as she put it.

“Quite frankly, of all the wealthy nations, we have the lowest safety net and the highest poverty, because we’re not willing to accept the fact that sometimes an American needs help. Even a veteran — even a soldier.

Following the financial crisis of 2008 when millions lost their jobs, homes and life savings, it is certainly understandable that emergency programs were established to help people transition and get back on their feet.

The operative term here is “transition” – a period of changing from one state or condition to another. Normally, when we think of a transition, especially as it relates to emergency funds from the government, we think short-term assistance. That could mean several months, or as is the case with unemployment benefits, 99 weeks.

However, no matter how Ms. Lee tries to spin this, welfare is no longer a short-term program for the majority of people on it. The “transition” the Congresswoman refers to is one in which a person simply stops working and starts collecting a monthly check from the government for producing absolutely nothing in return.

As we highlighted in a recent interview, and though it’s not necessarily descriptive of everyone who receives welfare assistance, the program itself is being abused on a massive scale. In the case of this particular caller, the “transitional living” involved going from working a job to sitting at home, smoking weed and still getting paid.

What doesn’t make sense is the confiscation of earnings from hard working Americans to the tune of $500 billion per year only to distribute those funds to apathetic leeches who contribute absolutely nothing to society. For many on government assistance you are a joke if you struggle at a 40-hour job for a weekly paycheck.

People like the esteemed Congresswoman Sheila Jackson Lee would like to see nothing less than cradle-to-grave long term government dependents.