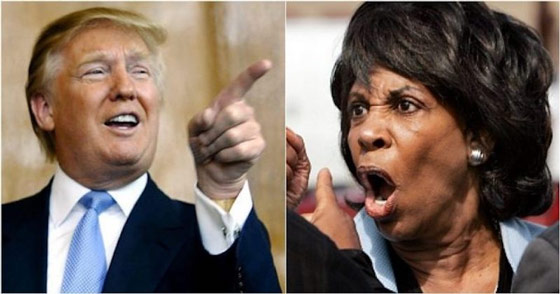 During an appearance at the Ali Forney Center gal in New York City, Congresswoman and “impeachment minstrel” Maxine Waters promised a roaring crowd that she would “take out” the president that very night – a statement that has left many wondering if this was a direct threat on President Trump’s life or whether it was some sort of sick joke. (especially in the wake of Rep. Steve Scalise being shot by a liberal).

Waters made the promise to the group, which benefits homeless LGBTQ youth, amid the backdrop of violence against conservatives and the mainstream media literally picking apart every single thing Trump says or does for any hint of something to attack him over. Its safe to assume they won’t be doing the same after Waters disgusting remarks.

“I’m sitting here listening, watching, absorbing, thinking about Ali even though I never met him. And with this kind of inspiration, I will go and take out Trump tonight,” Waters stunningly said.

Amazingly, according to a report in The American Mirror, YouTube quickly deleted the original video showing Waters remarks. The above video was uploaded as a replacement and could be deleted by the left-wing company at any time.

At the same time that a high-profile Democratic Congresswoman is openly joking(?) about taking out the president, the head of the Democratic Party is ramping up the rhetoric against him as well, telling a DNC committee gathering that Trump was the most dangerous president ever while urging his fractured party to unite against all things Donald Trump.

Perez also labeled Trump an “existential threat” with no apparent worry that his words could be taken, along with those by Waters and other liberals in the media, as ammunition for a crazy leftist to once again attack Congress or even the White House.

Perez’s comments come as he reorganizes the DNC to better serve establishment candidates, pushing out several prominent Bernie Sanders supporters while pretending the shuffle was about diversity when in reality it was a transparent move to make sure he can control who the party supports for president in 2020.

Going back to liberals seemingly embracing violent rhetoric against the president, it is important to keep in mind that the mainstream media themselves are also directly complicit in this move towards violence as they have either contributed to the vicious rhetoric or refused to call out those that have.

One can only hope that another attack doesn’t actually happen. If it does, we know who to blame.