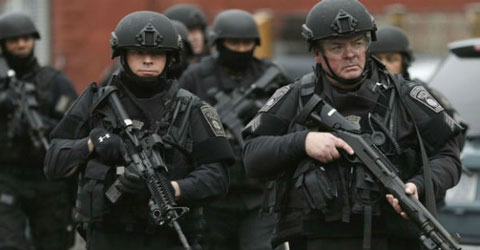 By the late 1920s, Joseph Stalin became the unchallenged leader of the Soviet Union after having eliminated his opposition.

He topped it off in 1929 by serving a decisive blow to anyone that would dare to oppose him by outlawing private gun ownership in the country.

From that year on until 1953 when Stalin died, it’s estimated that more than 20 million Soviet citizens that were seen as a threat to the country’s leadership.

People were rounded up and either murdered outright, or sent to infamous gulag labor camps.

Stalin is an extreme case. But history is ripe with examples of governments which disarm their citizens, only to engage in serious oppression afterwards.

Communist China. Nazi Germany. Cambodia. Guatemala. Uganda. The list goes on and on. Pacification of the citizens is almost always a prerequisite to totalitarianism.

There have been a lot of attempts to disarm, or at least partially disarm, people in the US throughout history as well.

But the latest proposal is especially telling.

H.R. 5344 is a bill currently going through Congress that would ban the purchase of body armor.

Violation would carry CRIMINAL penalties, including up to ten years in prison.

Many bullet-resistant items on the market now, such as bulletproof backpacks for school children, would be banned by this legislation.

This is incredible given that the legislation is all about banning something that is purely defensive.

Whatever your stance on firearms, I hope we can agree that it’s pretty damn difficult to hurt another human being with body armor.

So why in the world would they want to ban it?

The government claims that “criminals and rampaging madmen” can “wreck havoc” while wearing body armor, and it’s important to shield police from these nefarious individuals.

Uh, wait a sec– you mean the same police that go around terrorizing ordinary citizens who aren’t breaking any laws whatsoever?

The same police who beat homeless people to death?

The same police who shoot and kill innocent animals in broad daylight in the middle of the street?

The same police who scream “I will f***ing kill you!” with their weapons trained on crowds of protestors exercising their constitutional rights?

This is such a disgusting, yet unfortunately predictable, turn of events in the Land of the Free.

It’s enraging. It’s infuriating. And it’s so obvious: the country has become a giant police state. And the trend is not getting any better.

It’s time to look at the objective evidence all around you.

They spy. They steal. They wage illegal wars. They authorize military detention of civilians. They assassinate citizens.

They intimidate. They terrorize. They torture. They suspend due process when it suits. They destroy anyone who challenges them.

And now they want to take away a non-violent means of protecting yourself.

This is our reality. And at a minimum, it’s time for rational, thinking people to come up with a Plan B. What’s yours?

This article has been contributed by Simon Black of Sovereign Man.

SHTFplan Editor’s Note: They’ve already begun putting restrictions on the purchase of ammunition and have attempted to ban online sales. Why would the government be looking to ban body armor? Is it because a handful of people a year wear it during the commission of a crime? Or is something more sinister in the works? What next? Will they be outlawing gun powder, brass casings, rifle scopes, night vision, crossbows and anything else related to personal defense?

This is the new America. And it’s only going to get worse.

Visit CATI Armor for the latest in Body Armor Technology.