Congress shall make no law respecting an establishment of religion, or prohibiting the free exercise thereof; or abridging the freedom of speech, or of the press; or the right of the people peaceably to assemble, and to petition the Government for a redress of grievances.

Amendment I
The Constitution of the United States of America
September 17, 1787 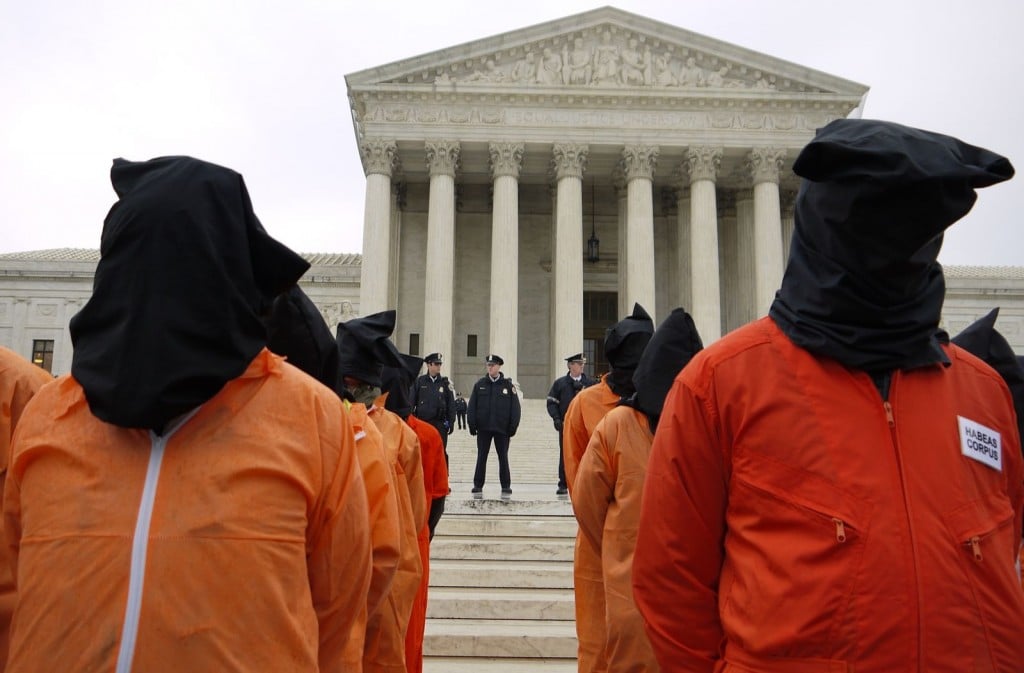 It seems like every day brings us one step closer to a totalitarian police state, and today is no exception.

The Daily Crux and Economic Policy Journal have reported on a little known bill that was overwhelmingly approved by the House of Representatives (H.R. 347 vote tally 388-3) and the Senate (S.1794 passed with unanimous consent, no voting records were kept of which Senators approved).

The Federal Restricted Buildings and Grounds Improvement Act of 2011 essentially strips Americans of their right to protest and assemble in government buildings or on public or private grounds where events of “national significance” are taking place.

The summary of the bill clearly outlines the direct attack on our First Amendment protections which allow for peaceable assembly and public redress of grievances against our government or elected officials within it:

Bill sponsor Tom Rooney (R-FL) claimed in a tweet responding to grievances on the internet, that “HR 347 does not effect your right to protest in any way whatsoever. It deals with fence jumpers, not protestors.”

As it turns out, the two page bill deals not just with ‘fence jumpers,’ but also lays the groundwork for all protests, gatherings and politic dissent in any facility or grounds in the United States of America that has been identified as a place of ‘national significance’ or where the Secret Service is charged with the protection of an individual – ANY individual, whether it’s the President, a congressional member or anyone else of national interest.

This is serious business, and you can be assured that, while Tom Rooney may have meant for the bill to stop fence jumpers, it can and will be used for far more than that:

The new legislation allows prosecutors to charge anyone who enters a building without permission or with the intent to disrupt a government function with a federal offense if Secret Service is on the scene, but the law stretches to include not just the president’s palatial Pennsylvania Avenue home. Under the law, any building or grounds where the president is visiting — even temporarily — is covered, as is any building or grounds “restricted in conjunction with an event designated as a special event of national significance.”

It’s not just the president who would be spared from protesters, either.

Covered under the bill is any person protected by the Secret Service. Although such protection isn’t extended to just everybody, making it a federal offense to even accidently disrupt an event attended by a person with such status essentially crushes whatever currently remains of the right to assemble and peacefully protest.

In the text of the act, the law is allowed to be used against anyone who knowingly enters or remains in a restricted building or grounds without lawful authority to do so, but those grounds are considered any area where someone — whether it’s President Obama, Senator Santorum or Governor Romney — will be temporarily visiting, whether or not the public is even made aware. Entering such a facility is thus outlawed, as is disrupting the orderly conduct of “official functions,” engaging in disorderly conduct “within such proximity to” the event or acting violent to anyone, anywhere near the premises. Under that verbiage, that means a peaceful protest outside a candidate’s concession speech would be a federal offense…

For those who will undoubtedly be charged under the new legislation, the penalties will be severe.

If you are found to possess a weapon deemed as dangerous (not necessarily a gun) when you knowingly enter an event of national significance you can be imprisoned for up to ten years.

If you are a peaceful, unarmed protester and you disrupt an event you’ll be treated with a bit more mercy by our benevolent leaders and be given up to one (1) year in prison.

With what we’ve seen over the last few year in Greece, greater Europe, Syria, and even the United States, the legislation makes complete sense from a government standpoint. What better way to keep dissenters and protesters quiet than to imprison them for months or years? It will take only a few public examples the next time a Tea Party or Occupy style protest take place and millions of Americans will understand that staying home and staying silent is their new Patriotic duty.

And, if it so happens that protests turn to violent rioting and civil unrest, the government will have the pretext to arrest, detain and imprison anyone and everyone in those ‘restricted areas of national significance.’

Housing these criminals should not be a problem, as our government, the Pentagon and DHS have been planning for just this scenario for quite some time, going so far as to build largescale detention facilities where those identified as subversive to our government can be re-educated.