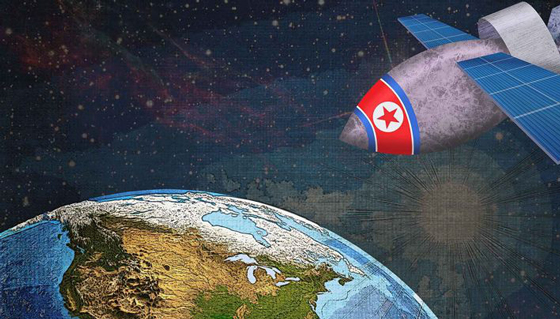 There was a report by Paul Bedard of the Washington Examiner detailing the revelations of former U.S. Marine Tommy Waller’s recommendations regarding the EMP (Electromagnetic Pulse) threat by North Korea. Waller has staunchly stood in the corner of the EMP Commission, now disbanded through withholding of funding, and currently serves as the Director of Special Projects at the Center for Security Policy. He is urging the President to create a special commission by Executive Order to plan for measures to counteract the threat of an EMP attack.  Waller also said this as reported in the article by Bedard:

“The first and foremost thing he [the President] must write is an executive order establishing his own EMP commission in the White House – a task force that draws from the experience of the previous EMP Commission.  Massive intelligence failures grossly underestimating North Korea’s long-range missile capabilities, number of nuclear weapons, warhead miniaturization, and proximity to an H-Bomb, the biggest North Korean threat to the U.S. remains unacknowledged – nuclear EMP attack.”

This all comes on the heels of the disbanding of the EMP Commission, a panel of the foremost experts on EMP threat, to include Dr. Graham and Dr. Pry, mentioned in numerous, previous articles. These experts and others, to include Tommy Waller, have been warning the Administration that North Korea is actively mapping out a plan of attack via EMP against the United States. These warnings have not only gone unheeded, but as mentioned, the former EMP Commission was the only such organization to address such a threat, and it has been dismantled, although its members did not accept any pay for their expert analyses and recommendations.

Dr. Peter Pry went a step further and said that Obama administration “holdovers” undermined the now-defunct Commission’s clearances, operational funds, and reports (such as briefings and conferences) … even though the experts worked for nothing and took many expenses upon themselves out of pocket. Such was their level of commitment and the priority placed upon the threat…a threat that has been largely ignored even before the Obama years.

Since the North Koreans have “slowed down” their nuclear tests, it’s no longer an issue that is televised to the public daily. Akin to a nation suffering from “Attention Deficit Disorder,” most of our news is sensationalistic drivel only fit for tabloids (therefore not news), or geared by the liberal Mainstream Media (MSM) to attack the President and push communist-social justice issues. The Media and the Universities are the hammer and sickle being used to destroy our country from the inside…funded by oligarchs and protected by politicos.

The President’s tour of the Asian-Pacific theater did not cause North Korea to take one step backwards in the development of its nuclear arsenal. As the days pass, their ability to make good on their threats increases. North Korea already threatened the U.S. with an EMP attack months ago. Breitbart reported this on 9/7/2017. You can read it in this excerpt here:

“According to the Associated Press, shortly after North Korea launched its sixth nuclear test using an H-bomb, the “Hermit Kingdom’s” leader Kim Jong-un issued a statement through its state-run Korean Central News Agency (KCNA) claiming the weapon “is a multi-functional thermonuclear nuke with great destructive power which can be detonated even at high altitudes for super-powerful EMP (electromagnetic pulse) attack according to strategic goals.”

North Korea has not backed away from that stance nor retracted the threat. Over the weekend, it has been reported from several news sites that North Korea is nearing completion of its work on submarines that can launch ICBM’s (Intercontinental Ballistic Missiles), termed SLBM’s (Submarine-launched Ballistic Missiles). The rhetoric between Kim Jong-Un and President Trump has not ceased: it has just taken an occasional hiatus. How much longer of a hiatus will Congress and the Administration have before they follow the recommendations of the experts? Perhaps the greater question is what will North Korea do when its period of inactivity comes to an end?

The next world war will begin with an EMP weapon detonated over the continental United States, followed by a nuclear exchange and then warfare with conventional forces.