Comedian Says Facebook Is “Coming After Him” In Wake Of #ClintonBodyCount 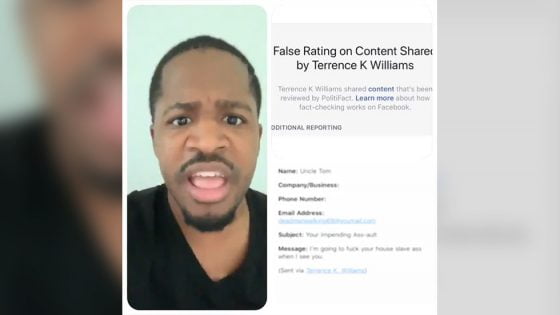 Actor and comedian Terrence K. Williams says that the social media giant Facebook is coming after him in the wake of the popular hashtag Clinton Body Count. Facebook has been flagging his posts as “fake news” after his take on Jeffery Epstein’s death went viral thanks to US President Donald Trump.

In the aftermath of President Trump retweeting his post, Williams says he has been bombarded with death threats. He also accused Facebook of trying to police his opinion by telling his followers that his page and content are “fake news.” Williams said it is absurd to fact check comedy.

I am a comedian. How can you fact-check a joke? I have never in my life heard about someone fact-checking a joke. What happened to free speech? Please, President Donald Trump, do something about that free speech stuff.

According to a report by RT, Williams’s profile description on Facebook describes him as an actor, comedian, and Twitter commentator. Many of Williams’ subscribers have confirmed receiving notifications that some of the man’s posts they shared were “fake news.”

“I received’ a fact check claiming the post I shared was false. It was the video of Terrance questioning the Clinton involvement on Epstein,” a commenter wrote. “Yup, I shared one of your posts and also got the Fact Check: False News notification for FB as well. Didn’t know opinions could be fact-checked. Crazy,” another said.

I never experienced racism & hatred until I voted for Trump. I’m just an American Citizen supporting the President of the United States of America.

Williams argued that Facebook’s crackdown on him is part of a broader anti-Trump and anti-conservative bias practiced by the major social media platforms. Big tech has been censoring information and Google has a list of websites that are blacklisted and will no longer show up in a search. (This website is blacklisted.)  This problem has been made vocal by many prominent Republicans, including Trump himself.

They are coming after conservatives and Trump supporters because 2020 is around the corner and they are trying to shut me down. – Terrence K. Williams

Things have gotten so bad that Williams is now fearful something could happen to him. He told his supporters that: “if anything happens to me, just know, somebody on the left did it, somebody who did not like Trump did it.”

This is not the first time Williams has been censored by Facebook either. The comedian was briefly suspended last year after he posted screenshots of threats he received.