Updated: Civil Unrest Breaks Out In Europe: 50 Million Jobs to be Vaporized Globally 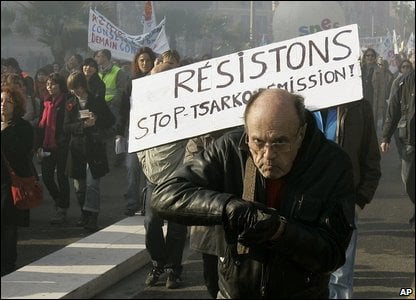 “We are on the road to serious social instability, which could be extremely dangerous in some countries to democracy itself.”

Riots broke out late last year in Greece, just last week in Iceland, and as recently as yesterday throughout France and Germany, as job losses mount across the globe. The ITUC warns that 50 million jobs will be vaporized worldwide this year. This will lead to increased crime and social instability in democratic nations, as more than 200 million people will be driven into absolute poverty.

This may come as a surprise to some, but not to those that follow Trends Research Institute forecaster Gerald Celente, who has been predicting economic riots for several months. In a recent interview on Financial Sense Newshour, Celente says:

“We’re going to see a revolt, actually. When people lose everything and they have nothing left to lose, they lose it. And, people are going to start losing it. You know, people are one job away from losing everything.”

Celente believes that we’ll start seeing the roots of the coming civil unrest in late February 2009 or early March.

The government may be planning for the same. Last year, the Bush administration took steps to have a domestic police force, directed by the US Military, in place in the event of social instability or all-out riots. The unit encompasses some 20,000 US military personal and is designed to be a quick response task force in the event of a terrorist attack, civil unrest or a national emergency.

While we may not see anything as severe as full blown “food riots” for at least a couple more years, if ever, we may start seeing protestors hit the streets very soon. When you’re unemployed, what better place to be than the local rally?

As someone who recently experienced a 2 week city-wide outage of essential services including electricity, food, water and gas, I would strongly urge you to have an emergency store of rations, water (or water filter), cash and other life essentials for at least a couple of weeks.

It is a small investment to make for peace of mind.

Update 1 : Some friends of mine in Europe who read this blog emailed me (yes, we’re global!) saying that Eastern European news stations are advising travelers to avoid France altogether, as Paris and other major cities will be “paralyzed” as a result of upcoming strikes.