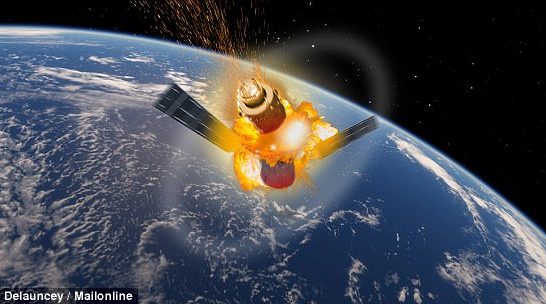 Although most of the Tiangong-1, the Chinese space station erratically flying through space toward the Earth, will burn up in the atmosphere, there’s a chance part of it will survive and make an impact.  But scientists still don’t know who could be near the impact zone.

China’s prototype space station, Tiangong-1 or “heavenly place”, could re-enter the atmosphere as soon as this week. Scientists say that most of the eight-tonne spacecraft is expected to burn up as it plummets through the atmosphere, there is a chance some of it will survive all the way down to the surface.

While most of it will burn up during re-entry, around 10 to 40 percent of the satellite is expected to survive as debris, and some parts may contain dangerous hydrazine. However, due to changing conditions in space, it is not possible to accurately predict where the module will land. “It is only in the final week or so that we are going to be able to start speaking about it with more confidence,” said Dr. McDowell. “I would guess that a few pieces will survive re-entry. But we will only know where they are going to land after after the fact. –SHTFPlan, March 8, 2018

According to the Guardian, there’s no cause for alarm. In terms of size, Tiangong-1 is only the 50th largest spacecraft to come down, and there have been no recorded deaths or injuries from people being struck by debris from any of them. The largest uncontrolled entry was SkyLab, the 77-tonne United States space station, which disintegrated over Western Australia. It didn’t injure anyone but large parts of it were later collected.

The other concern is the highly toxic waste on board the space station.  A toxic chemical known as hydrazine is being carried by Tiangong-1. Hydrazine is an inorganic chemical compound. It is a colorless volatile alkaline liquid with powerful reducing properties, used in chemical synthesis and in some kinds of rocket fuels. Hydrazine is highly toxic and dangerously unstable unless handled in solution.

The changes of the spacecraft hitting anywhere populated are slim to none, but the toxic chemical hydrazine could still be damaging regardless of the place of impact.