China Issues Dire Warning On North Korea: “Sooner Or Later It Will Get Out Of Control And The Consequences Would Be Disastrous” 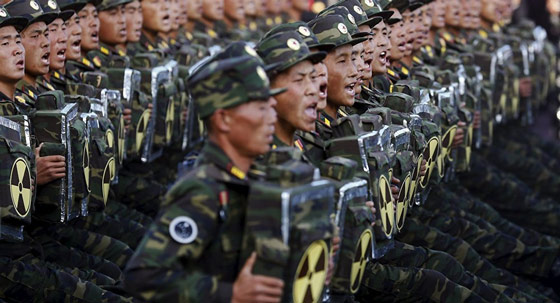 While the world watches in jest as  Japanese residents prepare for the possibility of a confrontation with North Korea by panic buying nuclear shelters and air purifiers, we may soon realize that their efforts to desperately acquire protective gear and equipment for nuclear disaster were quite prescient.

Yesterday, North Korea successfully tested what is reportedly an ICBM (Inter-Continental Ballistic Missile) capable of striking Alaska from the Korean peninsula. Coupled with their purported advancements in nuclear technology, North Korea may now have the ability to launch devastating attacks on their southern neighbor, Japan and even the United States. And if they have not yet achieved the ability to fit a nuclear warhead on an ICBM and deliver it effectively to its target, they are inching closer by the day.

So close, in fact, that Chinese Ambassador Liu Jieyi’s recent remarks on the matter suggest that we are nearing a dangerous breaking point:

“Currently tensions are high and we certainly would like to see a de-escalation,” Liu told a news conference at UN headquarters as China takes over the Security Council presidency in July.

“If tension only goes up … then sooner or later it will get out of control and the consequences would be disastrous,” he said.

Earlier this year President Trump deployed three carrier strike groups to the region, signaling the real possibility that the United States will no longer follow what Secretary of State Rex Tillerson calls a policy of “strategic patience” employed by Trump’s predecessors.

Though the threat seems to be muted by global media, China and Russia appear to be taking it very seriously, with both having reportedly deployed tens of thousands of troops and equipment to their respective borders with the North.

All of the signs suggest that military action is about to occur. And while most Americans may think that North Korea would be another Iraq, wherein the battle could be won in a matter days, the fact is that North Korea has a massive military and now, as confirmed yesterday, an ICBM capable of striking long-range targets.

Now may be a good time to imitate the Japanese by preparing for the worst, because the moment the world realizes that war is imminent there will be a run on banks and grocery stores that will likely leave shelves and ATM machines completely empty. Following the Fukushima nuclear disaster, the price of government recommended anti-radiation pills skyrocketed from $15 to over $200 per unit. We expect to see a similar effect in coming weeks and months for preparedness equipment like gas masks and NBC body suits as tensions on the Peninsula heat up.

War is coming. President Trump has made this very clear and North Korea does not appear to be heeding his warning. All bets will be off once the missiles start flying.

Because all three of the world’s major super powers will be involved in one way or another it is not only possible, but quite likely that things could spiral out of control very quickly.

Related: At The Threshold Of War: “The Choice Is Not Up To Us Anymore… It Is Being Decided Upon At This Very Moment”