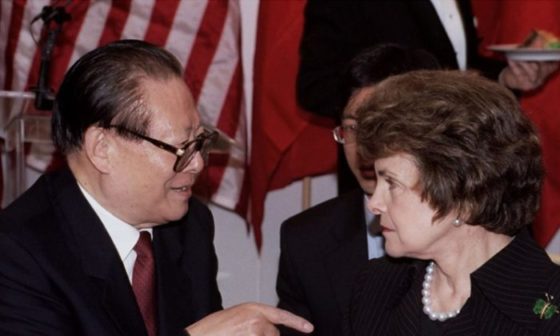 For 20 years, California Senator Dianne Feinstein used taxpayer funds to employ a Chinese spy. She hired him as her “driver” and now the infamous anti-gun leftist is in the hot seat for her alleged collusion with communist China.

New details emerged Wednesday about how a mole for the government of communist China managed to stay by Senator Dianne Feinstein’s side for nearly 20 years as her driver. Information is just now surfacing about Feinstein’s possible collusion with China. According to CBS local affiliate KPIX5, all eyes are on Chinese intelligence in the Bay Area after the website Politico reported last week that a staffer for Senator Feinstein turned out to be a Chinese spy who reported back to Communist government officials in China about the Bay Area’s local politics.

The column revealed that the Chinese spy was Feinstein’s driver who also served as a gofer in her Bay Area office and was a liaison to the Asian-American community. And former FBI agent and KPIX 5 security analyst Jeff Harp said he was not surprised. “Think about Diane Feinstein and what she had access to,” said Harp. “One, she had access to the Chinese community here in San Francisco; great amount of political influence. Two, correct me if I’m wrong, Dianne Feinstein still has very close ties to the intelligence committees there in Washington, D.C.”

Harp ran counter-espionage for the FBI in the Bay Area of California. He said in addition to traditional political intel and diplomatic secrets, Bay Area spies are often focused on things like R&D, technology and trade secrets. “They [communist China] also have an interest in the economy here; how to get political influence here,” said Harp. “What’s being developed in Silicon Valley that has dual-use technology. All of that is tied to the Bay Area.” Harp pointed out politicians with access to classified information are generally trained on what not to say, but he also noted that when you have a driver behind the wheel day in and day out for 20 years, there are more opportunities to slip up.

Feinstein’s Chinese driver even attended Chinese consulate functions for the senator at her request. Investigators at the time reportedly concluded the driver hadn’t leaked anything of substance and Feinstein forced him to retire after she acted “mortified” that she’d been infiltrated.

The FBI and Senator Feinstein’s office both refused to comment.