Chinese Billionaire Warns America: China Has 25,000 Spies Who Are “Ready To Destroy The U.S.” 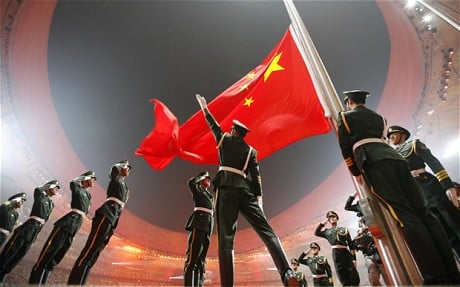 Since the 1980’s, the US has caught and imprisoned over a dozen people who were spying on American government agencies and corporations. So we catch Chinese spies once every few years. With that kind of frequency, you’d probably assume that China doesn’t have that many intelligence assets in America at any given time. Based on those numbers, a safe estimate would be in the hundreds, or perhaps thousands.

But it turns out that those estimates would be incredible low. According to Guo Wengui, a billionaire investor who has fled China and moved to New York since becoming a major critic of the Chinese regime, there are probably 25,000 spies in America who are working for Beijing.

Those numbers are derived from what he claims, are his close ties to multiple Chinese intelligence agencies. That may sound far fetched to most Americans, but in China the public and private sectors are closely aligned. They’re practically the same entity. So we should take his warnings very seriously, which were brought up in a recent interview with The Freebeacon.

According to the businessman, defensive intelligence was mainly focused on learning about the United States. The operations then shifted in 2012 to “offensive” spying, he said.

“By offensive [operations], I mean to be ready to destroy the U.S. in ways they can,” Guo said.

And these spies don’t just consist of Chinese immigrants. According to Guo, many of them are treasonous Americans who have sold their country out for a paycheck, and they can be ruthless.

China’s budget for intelligence gathering before 2012 was around $600 million annually.

Around 2012, a decision was made by Chinese leaders to dispatch another 5,000 spies to the United States. “Some of them were sent as students, some as businessmen, and some as immigrants, but all together, 5,000,” Guo said.

“In addition to that, they developed between 15,000 to 18,000 other spies, and these are not directly sent but these are developed within the United States.”

The recruited agents are not limited to Asians and Chinese-Americans but include all ethnic groups, including Hispanics, Blacks, and Caucasians.

“And now the budget is between $3 billion to $4 billion annually, and this is information up to one month ago,” he said.

“You don’t know which organizations in China are responsible for sending these spies, how they are managed, and to what purpose,” he said. “And the U.S. adopts a very legalistic perspective to look at the question of spying. Yet, for China their methods are not what the United States understands.”

“These spies, when they come to the United States, they could sleep around, they could put poison in your glass of wine to kill you; completely unscrupulous,” he said.

As for their goals, Guo claims that the spies are mainly here to steal military technologies. But they’re also here to “buy” high level government officials, as well as political and corporate elites who can give China favorable business deals. And most what’s most frightening, is that these spies have implanted malicious software in our most critical infrastructure systems, and have thoroughly infiltrated our government’s major weapons suppliers.

Which raises an important question. How did our government let this happen? Isn’t the all powerful NSA surveillance grid capable of catching these people?

Apparently not. It appears that we’ve traded our freedom for security, but somewhere along the line we didn’t receive any security. While our government was busy funding and training the terrorists that would later inspire the acceptance of widespread government surveillance and the destruction of our civil liberties, they overlooked the flood of Chinese spies who have infiltrated every level of our society.

You could call it incompetence, but it could also be something far more sinister. As Joel Skousen has pointed out many times, our government is riddled with globalists who have a hidden agenda. They want to usher in another world war between the US, China, and Russia, which will bring about the destruction of America, and make way for a global government. As part of that plan, they have been undermining America at every turn in the hopes that our country will lose the war against China; a war which they are orchestrating. Perhaps as a part of that effort, they’ve been looking the other way as the Chinese government steals and compromises our infrastructure and advanced military technologies.

Whatever the case may be, if Guo is correct then America is a severely compromised nation that is in no position to fight another world war.