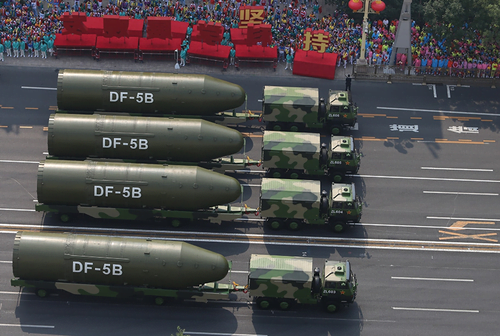 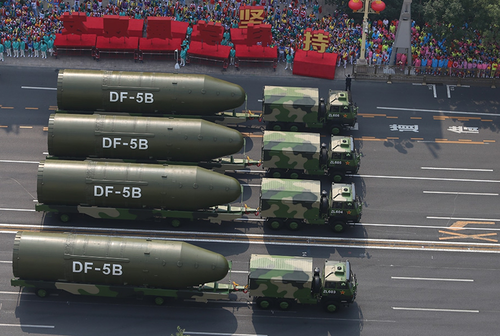 The Chinese government has greatly “accelerated” its nuclear weapons program due to a revised threat assessment of risk posed by the United States, according to a new in-depth Wall Street Journal report that cites both Chinese and US officials. It follows a Pentagon assessment from last year which laid out Beijing’s drive to “modernize, diversify and expand” its nuclear arsenal.

The fresh WSJ investigative report appears to confirm the prior US military assessment that China seeks to expand “land, sea and air-based nuclear delivery platforms” while establishing the more necessary infrastructure to support it.

While its nuclear goals predate Russia’s invasion of Ukraine, the war which kicked off on Feb.24 is believed to have given greater impetus to the belief China needs a stronger deterrent arsenal. Specifically, the report underscores that “Chinese leaders see a stronger nuclear arsenal as a way to deter the U.S. from getting directly involved in a potential conflict over Taiwan.”

Satellite imagery cited in the report additionally appears to confirm accelerating work on over 100 suspected new missile silos in remote desert regions of Western China. While some of this has been the subject of much Western reporting and speculation over the past number of months, based also on open source satellite analysis, the weekend WSJ report has some bombshell and alarming lines such as the following, which says the Chinese Communist government leadership fears covert Washington regime change efforts down the road:

The people close to the Chinese leadership said China’s increased focus on nuclear weapons is also driven by fears Washington might seek to topple Beijing’s Communist government following a more hawkish turn in U.S. policy toward China under the Trump and Biden administrations.

American military officials and security analysts are concerned China’s nuclear acceleration could mean it would be willing to make a surprise nuclear strike. The people close to the Chinese leadership said Beijing is committed to not using nuclear weapons first.

However, while China does have an official ‘no first use’ nuclear policy doctrine, the United States does not and has even been long resistant to it over years of activist lobbying of both Democrat and Republican administrations.

The precise numbers of China’s nuclear warheads are not known, but it’s generally understood to be far behind that of the United States, likely by a magnitude of multiple thousands. One official cited in the report, described as “close to the leadership” in Beijing, said: “China’s inferior nuclear capability could only lead to growing US pressure on China.”

Testimony by the head of the U.S. Strategic Command showed for the first time that China’s ICBM-launched hypersonic glide vehicle tested in July flew 40,000 km for more than 100 minutes. https://t.co/0M7Bl364uQ

And further, on the way the Ukraine crisis has impacted China’s thinking – remembering too that Washington has of late piled on the pressure warning Beijing to cease any and all support to Moscow – the WSJ describes the following:

Nervous international reaction to Russian leader Vladimir Putin’s call for his nuclear forces to be put on alert following his invasion of Ukraine has offered Chinese officials a real-world lesson about the strategic value of nuclear weapons. So did Ukraine’s decision in 1994 to turn over the nuclear weapons left in the country after the breakup of the Soviet Union in return for security assurances from the U.S. and Russia.

Watching the tense situation continue to unfold, one former Chinese military officer was cited in the report as saying, “Ukraine lost its nuclear deterrence in the past and that’s why it got into a situation like this” – again which has only served to reinforce China’s worries over its nuclear preparedness.

Last week the head of U.S. Strategic Command, Adm. Charles Richard, warned US lawmakers over the “breathtaking expansion of strategic and nuclear capabilities” which he said translates to the PLA military being able to “execute any possible nuclear employment strategy.”