China Escalates Global Threats, Saying It Will “Nuke Japan” If The Nation Interferes With Taiwan; Gets Flooding In Return 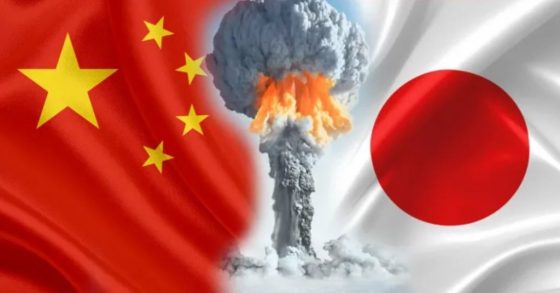 China has been very active lately against other nations but it may have recently crossed the line, and in doing so was gifted with flooding in a modern 21st-century Operation Popeye.

Last month, Chinese President Xi Jinping threatened that any nation in China’s way of its goals seeking to bully the Communist country would have its “skulls crushed or bashed.”

More specifically, Xi said the following during the celebration of the 100th birthday of the Chinese Communist Party (CCP.)

“Anyone who dares try to do that will have their heads bashed bloody against the Great Wall of steel forged by over 1.4 billion Chinese people,” Xi said.

The other thing to point out is where Xi made the speech, at the infamous Tiananmen Square — make no mistake, that’s no coincidence to celebrate the 100th birthday of the CCP. Xi pledged to build up China’s military, and also committed to the “reunification” of Taiwan as well as the social stability of Hong Kong while simultaneously protecting China’s own security and sovereignty.

Japan has made multiple calls to protect Taiwan, with the latest met with a threat by China in response. But before we get to China’s response literally threatening to drop a nuclear weapon on Japan if it interferes with China’s plan to invade Taiwan, there’s one more key event that took place prior to China’s dams breaking and flooding happening. China sailed a ship into the contested South China Sea waters around the Philippines, which resulted in the Chinese ship being chased off by Philippines Coast Guard ships.

This was after the U.S. Secretary of State Antony Blinken reaffirmed the U.S. commitment to defend the Philippines’ armed forces from attack in the South China Sea, CNN reported.

Two weeks ago, Japanese Deputy Prime Minister Taro Aso said that Japan must “defend Taiwan,” along with the U.S, The Japan Times reported.

“If a major incident happened (over Taiwan), it’s safe to say it would be related to a situation threatening the survival (of Japan). If that is the case, Japan and the U.S. must defend Taiwan together,” Aso said.

China’s response to Japan trying to interfere in Taiwan has been a literal threat to continuously nuke Japan until they surrender.

In the video, the CCP threatened to “liberate Taiwan,” and it warned against Japan deploying “one soldier, one plane or one ship.”

The video was deleted from Chinese platform Xigua after gaining 2 million views; however, copies were re-uploaded to YouTube and Twitter, Taiwan News reported.

In 2020, China produced and released multiple propaganda videos seeming to threaten the U.S., Hong Kong, Taiwan, and others. However, its latest propaganda video may have crossed the proverbial line; in retaliation, the U.S., Japan, or another nation may have responded with the gift of weather warfare resulting in flooding in the region. As of this report, details of the heavy rains – which analysts have pointed out are 30x worse than usual – have caused dams to break, further flooding Chinese cities.

The Chinese province of Henan has been hit by record-breaking rainfall and widespread flooding, primarily the provincial capital of Zhengzhou, which has seen torrential storms since last Monday. At least 25 people have died, according to official reports at the time of this writing. “The Guojiaju dam near the city collapsed at 1:30 am local time,” CGTN wrote in a now-deleted tweet.

The rainfall was the highest recorded since record-keeping began sixty years ago, with the city receiving an average year’s worth of rain in just three days, according to weather officials, Insider Paper reported.

How do we design our cities so that they're resilient to 30x shocks? pic.twitter.com/B8Osj0FoJq

The Guojiaju dam isn’t the only dam that collapsed. Two dams, in the Inner Mongolian city of Hulunbuir, also collapsed on Sunday afternoon Beijing time. They had formed reservoirs with a combined water storage capacity of 46 million cubic meters (1.6 trillion cubic feet), the Ministry of Water Resources said. In addition, The People’s Liberation Army regional warned that the relentless rain had caused a 20-meter breach in the Yihetan dam in Luoyang, a city of around seven million people in the center of China, with the risk that it “may collapse at any time.”

Ironically, just a few weeks ago, the United Arab Emirates caused flooding in Dubai after experimenting with geoengineering and cloud seeding to cause rain documenting that the process is possible recently. The UAE used weather-altering drones as part of a deliberately engineered plan to fight the intense 120-plus degree Fahrenheit heats. However, in playing witch doctor they caused massive floods due to overseeding clouds.

In December 2020, China itself even announced plans to increase its use of technology that artificially changes the weather to cover an area larger than India as CNN reported.

Experts in the country have even expressed worry that China may use its ability to control rain and snowfall as a weapon.

“Lack of proper coordination of weather modification activity (could) lead to charges of ‘rain stealing’ between neighboring regions,” National Taiwan University researchers conclude in a 2017 paper published in Geoforum.

To quote U.S. Defense Secretary William Cohen who made the following statement in 1996 according to the DoD:

“Others terrorists are engaging even in an eco-type of terrorism whereby they can alter the climate, set off earthquakes, volcanoes remotely through the use of electromagnetic waves… So there are plenty of ingenious minds out there that are at work finding ways in which they can wreak terror upon other nations It’s real, and that’s the reason why we have to intensify our counter-terrorism efforts.”

It can be assumed if China and the UAE have the power to play god causing flash rain, the U.S. also has the ability. In fact, this writer has documented the history of experiments on the weather with a whistleblower in a previous article published on Steemit at the time entitled: ““The Dangerous History Of Geoengineering And What Experiments Are Ongoing Today.”

The South China Morning Post cited an anonymous military source that stated that China’s most advanced hypersonic missile, the DF-17, is being deployed to People’s Liberation Army (PLA) bases in the provinces of Fujian and Zhejiang, which sit right across from Taiwan. The deployment of the missiles is part of a PLA pattern of a beefing up of its forces along the coast of China in what some analysts are saying are preparations for an invasion of Taiwan.

According to the unnamed source, “The DF-17 hypersonic missile will gradually replace the old DF-11s and DF-15s that were deployed in the southeast region for decades.” The source added that “The new missile has a longer range and is able to hit targets more accurately.”

The deployments of the missiles are a part of an expansion of the Marine Corps and Rocket Force bases in Fujian and Guangdong provinces, according to Andrei Chang, editor-in-chief of Kanwa Defense Review. Chang told the newspaper that “every rocket force brigade in Fujian and Guangdong is now fully equipped.” Chang further asserted that this is evidence of the communist regime’s invasion plans:

“The size of some of the missile bases in the Eastern and Southern theatre commands have even doubled in recent years, showing the PLA is stepping up preparations for a war targeting Taiwan.”

The war drums are so loud now that conflict between nations seems almost inevitable. Although right now it’s a silent war being waged in the cyber realm and with weather warfare, that could quickly escalate and change at the flip of a hat. If you are interested in weather warfare and geoengineering you can see this author’s article: “The Dangerous History Of Geoengineering And What Experiments Are Ongoing Today.”