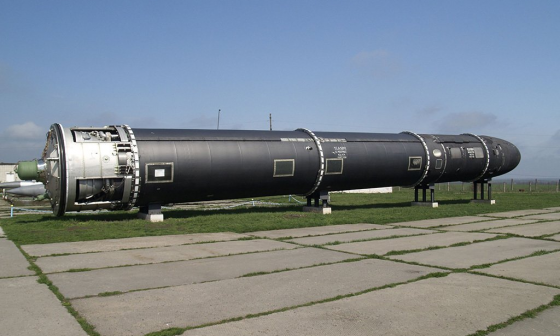 Ramzan Kadyrov, the leader of Chechnya, gave a rare interview to a smaller media outlet in the United States that aired Tuesday, and what he said is taking many aback.

While speaking to HBO’s Real Sports, Kadyrov denied that gay people are humans, that they exist in his region, and that his government regularly detains or tortures them, despite ample reports to the contrary. But that isn’t the news that’s riling up the masses, even though it is concerning that Kadyrov is more than likely committing human rights violations. He also made a troubling comment about his country’s nuclear arsenal and a Russian doomsday device.

Kadyrov said, “America is not really a strong enough state for us to regard it as an enemy of Russia. We have a strong government and are a nuclear state. Even if our government was completely destroyed, our nuclear missiles would be automatically deployed. We will put the whole world on its knees and screw it from behind.” That comment certainly puts the left’s insistence on a war with Russia in perspective.  And Kadyrov is probably being more accurate than not in that statement.

According to The New York Times, Russia built a system in the 1980s that could do what Kadyrov described, known as the Perimeter System. Bruce Blair, the former US nuclear officer who broke the story of the Perimeter System for The New York Times in 1993, told Business Insider that the system works when it detects nuclear explosions. Only a small crew, deep in a bunker, has a hand in the otherwise automated system, according to Blair.

Essentially, if another country conducted a nuclear attack that would destroy the government of Russia or anything a 1980s-era system would perceive as a nuclear attack, an automated system would empty Russia’s missile silos in an immediate counterattack. Blaire’s concern is the automation of such a system. “One concern is that it’s highly automated, and cyber attacks, for example, or other phenomena, natural or man-made, could set it off,” Blair said. “It poses a risk of accidental nuclear attack by Russia.”

But there has yet to be an accidental nuclear attack and it’s been over 30 years since the system was first activated. But could the 1980’s technology pose a problem and cause an all out nuclear war? It’s hard to say, and experts are not sure either. “This was designed to retaliate massively against the US. What the specific targets are in this plan no one really knows, but it can be safely assumed it’s large-scale,” Blair said, adding that it would destroy most Americans and most large US cities.

This is troublesome to many Americans, considering the US president is supposed to sign off on any nuclear attack to prevent accidental strikes, and the left is continuing to push the former Soviet Union increasing tensions with Russia. If Washington were incapacitated by a nuclear strike, it’s unclear whether it could respond at all. The US’s nuclear weapons are code-locked and absent the president and a backup in the Pentagon, the US may not be able to respond. Moscow code-locks its weapons as well, but this system would allow it to retaliate even after a nuclear decapitation.