Space watchers have warned that the sun may soon be waking up – as early as today – and it has the potential to direct high powered X-Class solar flares directly at earth.

So far today, solar activity is low. However, that could be the calm before the storm. The magnetic field of big sunspot AR1654 has grown more complex. It is now classified as a ‘beta-gamma-delta’ magnetic field, which means it harbors energy for X-class eruptions.

If there is a flare today, the blast would be Earth-directed.

This sunrise shot, taken at dawn on Jan. 16th by Jan Koeman on the bank of the Westerschelde River in the Netherlands, shows how AR1654 (circled) is almost directly facing our planet 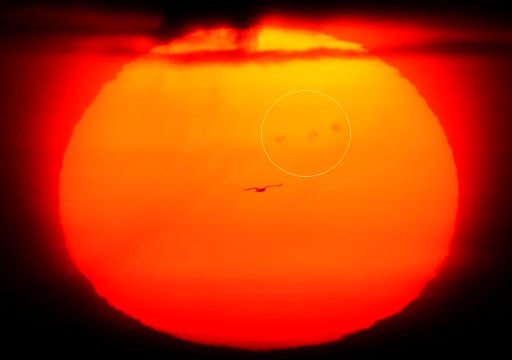 Though some ‘C’ and ‘M’ class flares have hit earth recently, none were strong enough to cause any serious, long-lasting damage, save some minor effects on satellites and radio stations.

The effects of such a flare hitting earth could be disastrous, wiping out essential infrastructure components like power grids and utilities, satellite communications, cell phones, transportation systems, and the internet. It’s been theorized that a strong enough solar flare similar to the one that struck earth in 1859, known as the Carrington Event, could potentially wipe out modern day electronic systems and send human civilization back to the 19th century.

In 1989, it took only seconds for Hydro-Quebec, the company that supplies power to the Canadian region, to fail when an intense geo-magnetic storm struck earth and caused a cascading breakdown in the electric grid. It is believed that the solar flare which caused the outage was rated at a class of X-15, and luckily only struck a small portion of the northern hemisphere.

Scientists have rated solar flares into different “divisions,” identified by a number following the letter class. In general, solar flare classes are rated from 1-9, but scientists have, as recently as 2003, measured flares that were literally off the charts:

Then come the X-class flares. Although X is the last letter, there are flares more than 10 times the power of an X1, so X-class flares can go higher than 9.

The most powerful flare measured with modern methods was in 2003, during the last solar maximum, and it was so powerful that it overloaded the sensors measuring it. The sensors cut out at X28.

The biggest X-class flares are, by far, the largest explosions in the solar system and are awesome to watch. Loops tens of times the size of Earth leap up off the Sun’s surface when the Sun’s magnetic fields cross over each other and reconnect. In the biggest events, this reconnection process can produce as much energy as a billion hydrogen bombs.

Should one of these off the chart flares be directed at earth, we could be looking at an Armageddon-like event in its aftermath.

According to Frank Gaffney, president of the Center for Security Policy, if electronic systems in the United States were wiped out, the consequences would be lead to a complete breakdown in society. Though Gaffney bases his assessment on the threat of an electro-magnetic pulse weapon, a powerful enough solar flare could cause similar destruction:

“Within a year of that attack, nine out of 10 Americans would be dead, because we can’t support a population of the present size in urban centers and the like without electricity.”

How likely is it that such a powerful geo-magnetic storm could hit earth?

According to a recent research study published by Space Weather: The International Journal of Research and Applications, the odds are not in our favor:

By showing that the frequency of occurrence scales as an inverse power of the severity of the event, and assuming that this relationship holds at higher magnitudes, we are able to estimate the probability that an event larger than some criteria will occur within a certain interval of time in the future. For example, the probability of another Carrington event occurring within the next decade is ∼12%.

It’s solar roulette and eventually our number will be up.