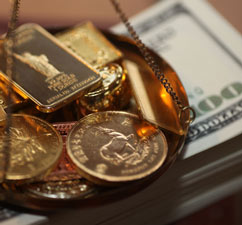 We can talk about technical charts, supply and demand fundamentals, and price manipulation, all of which point to significant increases in the value of gold and silver for the foreseeable future.

But according to Golden Arrow Resources CEO Joseph Grosso, who is credited with the discovery of the largest silver deposit in history, the single biggest reason that retail investors, institutional players and governments around the world are gobbling up physical precious metals, resource stocks and ETF’s at unprecedented levels is that they are scared to death of the state of the global economy and where it will go next.

Like an expecting father waiting for five years to see a baby being born, we are at the inception of a mining economy… There is a pause, a slight pause towards the U.S. dollar and that pause is allowing the oldest currency in the world, gold and silver [to rise] and that is now in favor.

… Right now, this is a scary time… People want to hop out [of traditional assets] and find safety in precious metals.

In the following interview with SGT Report the level-headed Grosso explains that there is still hope for America and the U.S. economy, but there will be a lot of pain before it gets better, the consequence of which is an environment that has historically boded well for precious metals as safe haven assets.

SGT Report: There is a web bot project out there that mines the internet for data… and the data mined by the web bot project suggests that some time in the future, because of worldwide monetary chaos, we will eventually see silver return to a 10-to-1 or 8-to-1 ratio… Right now the silver-to-gold ratio is hovering somewhere around 70-to-1… And you know as well as anyone, because you mine the stuff, silver is found in the earth’s crust much closer to a 10-to-1 ratio…

Joe Grosso: What you’re saying is really what dreams are made of… I remember a time when silver was somewhere around 40-to-1 and then it gravitated to 80-to-1.

So I do feel that there is a catch up for silver to come into a more humane ratio between the two, but it is of course the biggest dream that we will have a ratio of 10-to-1… this would make the silver price worth about $130 per ounce [at current gold price].

We’d like to see a return in the next three to five years where a lot of mines had to shut down and they can re-open again. Unfortunately for some, they have been liquidating assets… and out of the spoils we are now looking at acquiring or merging ourselves.

Silver… we’re glad to be in silver because it has two uses. One, as a precious metal. And second, almost 50% of the silver produced in the world is used for industrial use.

As Joe Grosso notes, mining companies have been pummeled over the last five years, leaving many to be either completely liquidated, or pausing operations until such time that prices eventually rise as a result of either core supply and demand fundamentals, or outright panic buying during economic crisis.

But unlike most proponents of a rising silver price, Grosso brings a unique perspective to the conversation, because he doesn’t necessarily see Venezuela-style meltdown, hyperinflation and chaos coming to the United States:

But you do have what it takes. You have a fully developed economy which has been going for years… The comparison is pale in my estimation… The United States is in a much better position to recover.

I think that America will come out of it.

… I really feel that we need to be grown up enough to know that in order to cure any illness, you need a bitter medicine. The more powerful the medicine, the quicker we will return to normality.

It needs to be dealt with, with stronger resolve. And I am sure your country will understand that the tough things that are to come is the medicine that is going to resolve the problem.

The American people do, indeed, understand that the system is broken as evidenced by the rise of extremely popular anti-establishment political candidates on both sides of the aisle.

It appears that, at least on some level, the people are willing to take the medicine.

But whether the governing bodies dispense it is a whole nother matter.

Failure to do so, says Grasso, means that things will only get worse.

If and when things get worse, panicked and concerned citizens the world over will continue to shift capital into assets like gold and silver, which will be the only currencies left standing when it really hits the fan.

For more important news updates and interview like the one you just watched visit SGT Report.