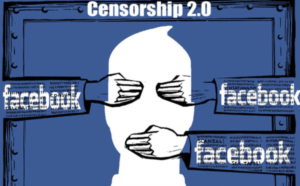 It has come to this: Censoring calls for freedom. American truckers have had their “DC Freedom Convoy” page removed from Facebook by the social media giant.

People are not allowed to demand the freedom that is their birthright, and Facebook is helping make sure the rulers stay in power over everyone else. The original Freedom Convoy ongoing in Ottawa Candad started after the rulers of Canada tried to coerce all truck drivers into getting injected against their will in order to continue to drive their trucks and deliver goods across the border with the United States.

The organizer of the American leg of the convoy, Jeremy Johnson, said Facebook’s move is “censorship at its finest,” adding that his personal account has also been removed from the platform. “They like to silence people that speak the truth,” he said of the ban. He also contacted a civil rights attorney to discuss the next steps.

Contacting lawyers is going to do no good. They are part of the system and that system is designed to protect itself against people who demand their freedom. If you actually want to help, we need to enlighten those about the system itself, not empower them to use the system that is oppressing them to try to earn their freedom. This is like the slave asking the master for a longer chain.

The Truth: “Governments Are The Biggest Criminals In The World, And They Don’t Want Competition”

Here is how you can actually help:

Waking up those only halfway there is the key to freedom for all.

A spokesperson for Facebook’s parent company, Meta, told Fox News that they removed the group’s page for repeatedly violating policies around QAnon, which they labeled as a “violence-inducing conspiracy network” in October 2020. They also announced then that any group pages and admins tied to QAnon will be removed.

Mike Landis, who is a trucker involved in the freedom convoy, said the movement is “a long time coming,” as Americans are now tired of the “government overreach.” He criticized politicians for not following the constitution. “The presence of that amount of people that show that they are unhappy with what’s going on is a good way to hopefully get their attention.”

The ruling class, however, has no intention of following the constitution. The problem isn’t that they aren’t following the rules they set out for themselves, the problem is that there is a throne that will always attract sociopaths.

As Larken Rose said, “it never hurts to have the ideas of self-ownership and non-aggression put into these situations. Because a lot of people there are upset with the current authoritarian regime, and the current agenda of those in power, but they’ve never really thought it through to realize that as long as there is a throne there, this sort of thing is gonna happen. The problem is not the clown on the throne…he isn’t actually the problem and if he wasn’t there, some other psycho would be there. Which is why the crappy idea of statism is what has to go.”

“But whether the Constitution really be one thing or another, this much is certain – that it has either authorized such a government as we have had or has been powerless to prevent it. In either case, it is unfit to exist.” ― Lysander Spooner, No Treason: The Constitution of No Authority

Rose’s book, The Most Dangerous Superstition, was the most eye-opening book I have ever read. The primary threat to freedom and justice is not greed, or hatred, or any of the other emotions or human flaws usually blamed for such things. Instead, it is one ubiquitous superstition which infects the minds of people of all races, religions, and nationalities, which deceives decent, well-intentioned people into supporting and advocating violence and oppression. Even without making human beings one bit more wise or virtuous, removing that one superstition would remove the vast majority of injustice and suffering from the world.

Let’s remove the veil for good. The great awakening is here and the illusion of freedom is being shattered.