Celente Warns: The Collapse of 2014: “If You Don’t Have Your Money In Your Pocket It’s Not Yours” 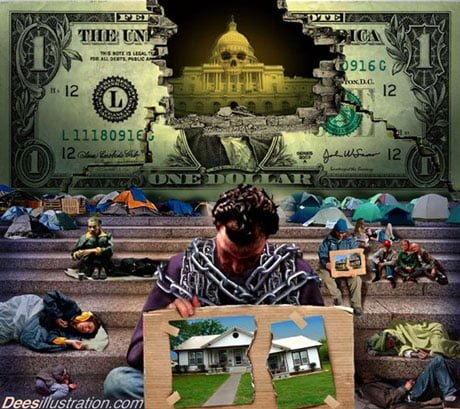 If there’s one thing that should be clear, it’s that nothing the government or their banking partners have done to solve the economic crisis has been for your benefit. They’ve enriched themselves, yet again, on the backs of the American people.

All the while, they’ve told us that everything is getting better. But anyone who’s paying attention know that nothing of the sort has happened.

We continue to shed jobs. Hundreds of thousands of people are still losing their homes. Personal debt is rapidly approaching 2007 levels. The U.S. government has borrowed more money than what we can ever hope to repay.

We are still in the middle of it and it’s only going to get worse.

If you think it’s over, that they saved us and we’re out of the woods, then you’ve got a lot of pain coming your way.

And if you think you still have plenty of time to prepare, that it’s decades or years away, you’d better think again.

Trend forecaster Gerald Celente predicted the collapse of 2008 in remarkable fashion. And now he’s warning of a similar crisis to come next year.

There’s fear and hysteria running through the entire global financial community, because as everybody knows all they did was postpone the inevitable.

[They’re going to] turn more of America into Slavelandia as well, where people can get those part-time jobs, have no insurance, no benefits, and not enough money to live on, and they’ll have to go on food stamps and other assistance…

I’m saying to everybody out there, If you don’t have your money in your pocket it’s not yours.

Any self-respecting adult that hears McConnel, Reid, Boehner, Ryan, one after another, and buys this baloney… they deserve what they get.

And as for the international scene… the whole thing is collapsing.

We are saying that by the second quarter of 2014, we expect the bottom to fall out… or something to divert our attention as it falls out.

It’s the militarization of the United States… because of the grand scheme. And that is, these people may be stupid – the people running government – but they’re very shrewd. And they know… that there’s no way to solve these economic problems.

The mayhem that went on at Walmart when people couldn’t cash in their food stamps.

Look what they did in Boston. To me that was a test. They closed down a hundred square miles… to hunt for a 19-year old kid.

Look at America’s most feared criminal of this last year. A 19-year old kids, Snowden, and Bradley Manning. Now there’s three faces of disaster you never want to meet in a dark alley.

So, you can see how this society is being controlled because they don’t want anyone to get out of line.

Watch Gerald Celente and Alex Jones discuss the coming trends and our future:

And when it hits, it’ll make the crisis of 2008 look like a picnic.

We survived that one, barely, but it took trillions of dollars just to stabilize, not fix, the system.

This time around, our creditors and the people as a whole may well lose confidence. And once that is lost, look out, because as Gerald Celente notes, the happenings at Walmart when the EBT system crashed were just a prelude.

Imagine that next time around it happens to not just EBT cards, but ATM’s and bank accounts, or that the U.S. dollar itself crashes to such an extent that it is no longer feasible as a mechanism of exchange.

In such a scenario you can fully expect disruptions to food supplies and the normal flow of commerce.

The only saving grace you’ll have are the physical assets in your possession – your arable land, long-term food stores, gold and silver, and the post-collapse labor skills you’ve developed.

The time to prepare is now or you may well experience the horrific effects to come.