Celente Warns Of Coming Riots: “The Collapse Is Engulfing The World” 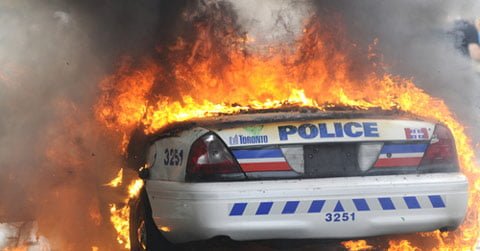 He accurately predicted the trends that have shaped the last decade. Ahead of the collapse of 2008 his Trends Journal newsletter issued a forecast that stock markets, which had just hit all time highs, would buckle in the first quarter of the year and that an unprecedented recession would blanket the global economy. He said the decline in  financial markets would then be followed by disillusionment in America’s political and economic systems, leading to the rise of a third-party and widespread protests across America. And while officials the country over tried to assuage fears in the populace, he cautioned that the middle class would continue to be destroyed through taxation, regulation and fiscal incompetence.

Now, renowned trend forecaster Gerald Celente warns that, despite establishment claims of recovery and growth, things are about to get a whole lot worse.

Celente isn’t suggesting that a massive collapse is going to happen in the future.

He says we’re already in it – and it’s taking hold right before our eyes across the entirety of the globe:

This selloff in the emerging markets, with their currencies going down and their interest rates going up, it’s going to be disastrous and there are going to be riots everywhere…

…So as the decline in their economies accelerates, you are going to see the civil unrest intensify.

If you want to know a business that will thrive in 2014, it may well be guillotines because these are ‘Off with their heads’ moments.

That’s why you are going to see heads roll.

…you can already see chaos engulfing the world as the Fed’s global financial scheme is collapsing.  This collapse is engulfing the entire world, from Russia, to South Africa, into China and emerging markets across the globe.

Should protesters in the U.S. threaten the status quo in any way they will be dealt with like the people who took to the streets in the Ukraine, Egypt, Iran, and Greece.

In fact, a Federal court recently upheld Congressional legislation passed in 2012 that allowed the herding of protestors into so-called “free speech” zones, and to charge those who assemble at “official functions” designated as areas of “national significance” with federal crimes punishable by one year in prison.

Under that verbiage, that means a peaceful protest outside a candidate’s concession speech would be a federal offense…

Carefully controlled protests involving individuals who have been bused in by their respective political party or union leaders are often televised by the mainstream media in an effort to give Americans a false sense of freedom.

When these protests turn to uprising and riots because millions of people can no longer keep a roof over their heads or food in their bellies, you can bet that those involved will be dealt with swiftly and behind the cloak of terrorism secrecy laws like the National Defense Authorization Act which essentially gives the government the right to detain anyone, for any reason, for an indefinite amount of time.

But the real question here is, why would the government need laws like this?

Why would they be war-gaming and simulating economic collapse scenarios and civil unrest?

The only plausible answer, given the current economic climate in America and sentiment on Main Street, is that the authorities at the highest levels of our government know that something very bad could happen.

And they confirmed this in two letters issued by two different Treasury Secretaries over the last several years. Most recently, the Treasury department noted that failure to satiate our nation’s never ending appetite for debt would have a “catastrophic effect” on our economy:

Credit markets could freeze, the value of the dollar could plummet, US interest rates could skyrocket, the negative spillovers could reverberate around the world, and there might be a financial crisis and recession that could echo the events of 2008 or worse.

Not only might the economic consequences of default be profound, but those consequences, including high interest rates, reduced investment, higher debt payments, and slow economic growth, could last for more than a generation…

The fall-out from our current economic climate is going to be unprecedented. For those who deny this is happening, understand that the above warning comes directly from our Treasury Department. They’re the money guys. And they are telling us what’s going to happen.

And be assured it won’t just be stock markets that drop precipitously.

What we’re talking about here is the collapse of the economy of the United States of America – the richest nation on Earth.

The consequences will be devastating on every level and those of us on Main Street will be taking the brunt of the impact.

Imagine a situation where jobs continue to be shed by the hundreds of thousands every month without abatement. A situation where the price of basic essentials like energy and food rise without restraint. A situation where medical care is so expensive that average Americans will go bankrupt trying to pay for government mandated coverage. A situation where whatever money you do have in savings becomes worthless because our currency loses credibility around the world.

This is what’s happening right now.

The scary version: There is no way to turn this around. It’s just going to get progressively worse.

If you haven’t taken steps to prepare – to insulate yourself for an economic end of the world as we know it – then life for you and your family is going to be horrific.

This is the depression.