CAUTION: Americans Should Be Prepared for ANYTHING on the 4th of July 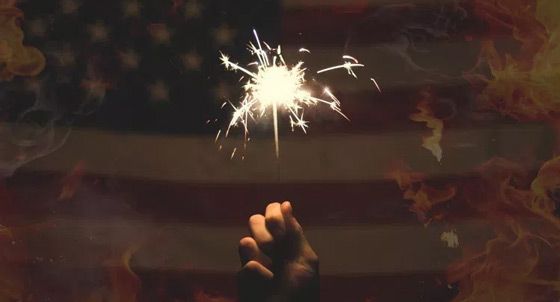 Folks will want to be especially alert on the 4th of July this year for a variety of reasons. Hopefully, it will just be a peaceful day of barbecues, parades, and fireworks, but there are some current events that you should consider before making plans to be out there with the crowds.

While there are no specific or credible immediate threats, with all the craziness going on in our country lately, it pays to be vigilant on the 4th of July. Personally, I tend to think that at some point in the not-so-distant future, things are going to boil over. Will it be this week during the Independence Day celebrations? I have absolutely no idea, but I’m not taking any chances and I felt compelled to share my thoughts with you.

Hundreds of thousands of Americans have been protesting.

This past weekend, hundreds of thousands of Americans protested the United States’ immigration policies in cities across the country.

More than 750 “Families Belong Together” marches took place in all 50 US states and Twitter showed sister demonstrations in London, Munich, Paris, Hamburg, Tokyo, and others cities around the globe. (source)

Most of the protests were uneventful and peaceful. And it’s important to remember that even if you disagree with the reasons behind the protest, it is absolutely the right of the people and the American way. But in some places, things got ugly. Other concurrent protests were going on, counterprotesters showed up, and what began as peaceful events turned into riots.

Last week, protesters blocked access to the ICE building, effectively shutting it down. They pitched tents and “occupied” the facility. 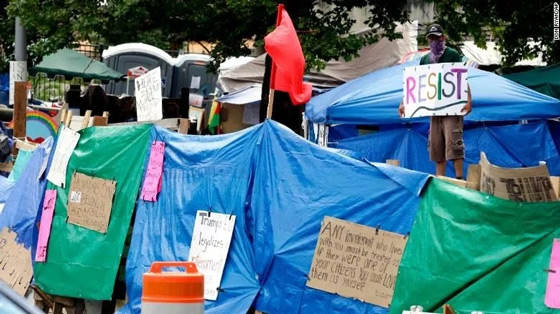 DHS formed a line to stop the demonstrators and then officers in riot gear began to remove the protesters. Arrests were made and tents were taken down. (source) Protesters have vowed to return.

Then on the weekend, the Patriot Prayer group staged a demonstration in Portland. The group is generally described as a “far-right” group by the mainstream media. Their Facebook page describes their mission:

“Patriot prayer is about using the power of love and prayer to fight the corruption both in the government and citizen levels that seek to gain power through division and deception.” (source)

During their demonstration, Patriot Prayer founder Joey Gibson says they were “charged” by Antifa counter-protesters, which caused police to revoke their permit to protest and declare the event a riot. A video shows that the event devolved into extreme violence.

With tensions about immigration high and violent revolution against the current administration threatened, it isn’t a stretch of the imagination to suspect that some rather heated Independence Day gatherings could be possible. In fact, a couple of planned events have already made the headlines.

Senator Ron Wyden of Oregon has called for protests on the 4th.

This is Fourth of July week and I’m calling it ‘First Amendment Fourth’ where we can get out and talk about families and where they belong…I want you to know that as long as I have the honor to represent you, there is zero chance we are going to stop speaking out against these injustices and zero chance we will stop pushing back against the callous treatment of families in America and we will keep pushing back until all families have a safe haven in America. (source)

And it isn’t just immigration that folks are planning to protest. In Chicago, Father Michael Pfleger, a Catholic priest, is rallying his followers for an anti-gun protest that will shut down the busy Dan Ryan Expressway on the weekend following Independence Day. He believes the act of civil disobedience is necessary to bring awareness to his demands for “resources for communities, national common sense gun laws, jobs, excellent schools and economic development.”

Also on the weekend following the 4th, protests are planned outside NYC’s Trump Tower.

As I’ve written before, Americans have been encouraged to hate and fear one another, so it’s no surprise that this is starting to bubble over.

A man connected to al Qaeda was just arrested for his violent 4th of July plans.

The FBI has arrested Demetrius Nathaniel Pitts, also known as Abdur Raheem Rahfeeq, for planning an explosion during a Cleveland, Ohio 4th of July parade.  Pitts has ties to al Qaeda and an extensive criminal background. Hw has been charged with “attempted material support of a foreign terrorist organization.” (source)

Federal authorities say they’ve arrested a man who talked about setting off a bomb at a Fourth of July parade in Cleveland and attacking people watching fireworks.

Officials said Monday that the man who’s an American citizen often expressed his support for al-Qaida and said he wanted to kill members of the U.S. military…Authorities have charged Demetrius Pitts with attempted support of a terrorist organization…FBI Special Agent Stephen Anthony says Pitts scouted out locations this past week for a site to attack in downtown Cleveland.

Anthony says it’s not clear how close Pitts was to carrying out his threats, but he says authorities couldn’t sit back and wait. (source)

It doesn’t take a lot of imagination to wonder whether Pitts is the only guy who has considered something like this.

Every year, Americans are warned of the potential of attacks.

No other day is more symbolic of the United States than the 4th of July, and an enemy of the country would take pleasure in selecting that particular day to inflict death and terror. Not only is there the symbolism, but there’s also plenty of opportunities, what with parades, fireworks, and festivities.

We can’t forget that the United States has really stirred up foreign relations of late, and have provoked many different countries for a variety of reasons, not the least of which are trade wars and sanctions.

The FBI, Homeland Security, and the National Counterterrorism Center generally recommend heightened security due to the potential threats to Independence Day celebrations.

As well, the US State Department has updated a “Worldwide Caution” for American travelers. It reads:

As terrorist attacks, political violence (including demonstrations), criminal activities, and other security incidents often take place without any warning, U.S. citizens are strongly encouraged to maintain a high level of vigilance and practice good situational awareness when traveling abroad…

…U.S. government facilities worldwide remain in a heightened state of alert. These facilities may temporarily close or periodically suspend public services to assess their security posture. In those instances, U.S. embassies and consulates will make every effort to provide emergency services to U.S. citizens. U.S. citizens abroad are urged to monitor the local news and maintain contact with the nearest U.S. embassy or consulate.

Terrorist groups including ISIS, al-Qa’ida, their associates, and those inspired by such organizations, are intent on attacking U.S. citizens wherever they are. Extremists may use conventional or non-conventional weapons to target U.S. government and private interests. Terrorists are increasingly using less sophisticated methods, including the use of edged weapons, pistols, and vehicles as weapons, to effectively target crowds. Extremists increasingly aim to assault “soft” targets, such as:

In multiple regions, terrorists, guerrilla groups, and criminals seek to kidnap U.S. citizens to finance their operations or for political purposes. The Department also remains concerned that terrorists could again seek to down aircraft using concealed explosives or hijack commercial flights. (source)

Some 4th of July safety tips

Of course, I don’t believe the threat of terrorism and riots means we need to stop living our lives and should hide out in our bunkers. Life is meant to be enjoyed and experienced. However, when it seems like the threat level could be higher than usual, we might need to adjust our plans.

Here are a few tips to keep the ones you love safe this Independence Day.

Being a prepper doesn’t mean that you can’t have fun or that you have to forsake all things popular culture. It just means you need to be vigilant while doing so.