As voter registration and identity fraud becomes a hot button issue across State legislatures you’d think that at least one group of voters – our elected officials – would understand the importance of laws and procedures designed to maintain the integrity of our legislative process.

According to the rules of the Texas State House of Representatives, for example:

Any member found guilty by the House of knowingly voting for another member on the voting machine shall be subject to discipline deemed appropriate by the house.

Given how clearly this rule is defined, and the fact that it’s common sense for each House member to be allowed only a single vote as is generally the case in all democratic voting proceedings, you’ll be astonished to see legislators not only voting for laws on their colleague’s voting machines when they’re not present, but actually racing to beat each other to the punch.

Eye Witness Account: I certainly noticed that there appeared to be far more votes on the tip board than there were people in the room.

The entire process – from the election of our State and Federal representatives at polls across America, to the very act of creating laws within the halls of our most hallowed institutions – has been compromised.

State representative Debbie Riddle blames the rule breaking on there being too many laws to pass and not enough bathroom breaks, the answer to which may be the novel idea that we pass fewer laws, something that the American people could desperately use given the literally tens of thousands of pages of statutes and regulations we’re expected abide by.

Whatever the case, the rules are clear. If our State and Federal legislators expect us to live under the rule of an iron fist originating from the legislation they create, then we expect them to live in kind.

There was a time in America when the corruption, fraud and injustice by elected officials was punished in full view of the public.

Perhaps it’s time we break out the tar and feathers again. 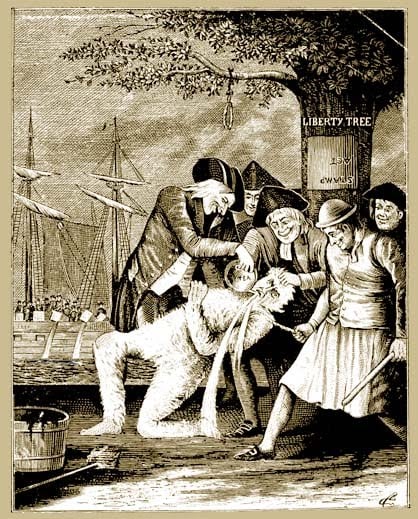