The United States is not prepared for a catastrophic power outage, according to an alarming new report from the President’s National Infrastructure Advisory Council (NIAC).

The report, titled Surviving a Catastrophic Power Outage, explains the findings of the council, which is tasked with examining the nation’s “ability to respond to and recover from a catastrophic power outage of a magnitude beyond modern experience, exceeding prior events in severity, scale, duration, and consequence. Simply put, how can the nation best prepare for and recover from a catastrophic power outage, regardless of the cause?”

It begins with a grim statement in the Executive Summary:

After interviews with dozens of senior leaders and experts and an extensive review of studies and statutes, we found that existing national plans, response resources, and coordination strategies would be outmatched by a catastrophic power outage. This profound risk requires a new national focus.

The NIAC defines a catastrophic power outage as:

Actions that all levels of government need to take to prepare are discussed in the report, as summarized in this chart: 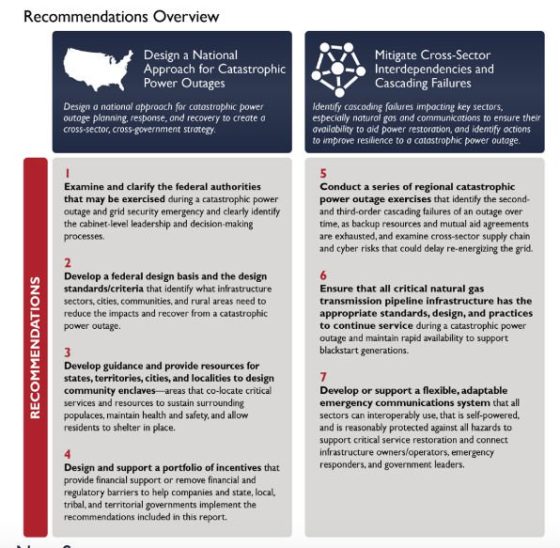 Here’s more from the 94-page report (emphasis ours):

The NIAC was challenged to think beyond even our most severe power disruptions, imagining an outage that stretches beyond days and weeks to months or years, and affects large swaths of the country. Unlike severe weather disasters, a catastrophic power outage may occur with little or no notice and result from myriad types of scenarios: for example, a sophisticated cyber-physical attack resulting in severe physical infrastructure damage; attacks timed to follow and exacerbate a major natural disaster; a large-scale wildfire, earthquake, or geomagnetic event; or a series of attacks or events over a short period of time that compound to create significant physical damage to our nation’s infrastructure. An event of this severity may also be an act of war, requiring a simultaneous military response that further draws upon limited resources. For the purpose of this study, the NIAC focused not on the cause, but rather on the consequences, which are best categorized as severe, widespread, and long-lasting.

While most of the report’s focus is on actions that government agencies need to take, the report (on page 14) does mention preparedness for individuals as well:

People no longer keep enough essentials within their homes, reducing their ability to sustain themselves during an extended, prolonged outage. We need to improve individual preparedness.

Most preparedness campaigns call for citizens to be prepared for 72 hours in an emergency, but the new emerging standard is 14 days.

For example, Washington, Oregon, and Hawaii have a standard that individuals have enough food and water to support themselves for 14 days. These efforts could serve as a model for federal and state preparedness resources, campaigns, and training.

“Based on the totality of available data,” said the report from the Air Force’s Air University, “an electromagnetic spectrum attack may be a threat to the United States, democracy, and the world order.”

The EDTF report examined threats from across the electromagnetic spectrum, including nuclear and non-nuclear EMP, geomagnetic disturbance (GMD), lasers and optics, directed energy (DE), and high-power microwaves (HPM), along with management of these threats.

Dr. Peter Pry (who served as chief of staff of the Congressional EMP Commission, on the staff of the House Armed Services Committee and at the CIA) highlighted some of the report’s findings in an article for The Daily Caller:

Both reports should provide an incentive to prepare for a grid-down event, if you haven’t adequately prepped already.

There are a few (totally insane) things you can expect during a grid failure.

If you are looking for a simple guide for beginners or for more advanced preppers to help you prepare for the possibility of a power grid failure, try reading The Prepper’s Blueprint. Written by Tess Pennington, the book expertly lays out effective ways everyone can begin to prepare for any apocalyptic situation.

“If we have learned one thing studying the history of disasters, it is this: those who are prepared have a better chance at survival than those who are not.” -The Prepper’s Blueprint