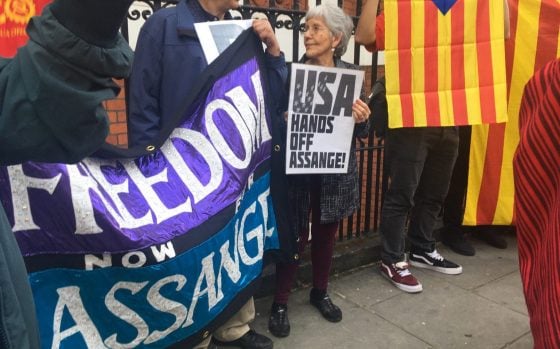 Today, people all over the world are celebrating WikiLeaks Founder Julian Assange’s birthday, and Freedom Of Press with the #Candles4Julian campaign, but one group of people — the Catalans — are also marching in a hunger strike celebrating their independence and fighting for the freedom of their own politically imprisoned comrades.

WikiLeaks Founder Julian Assange has been imprisoned for months in Belmarsh prison, pending a hearing on extradition to the United States. Ironically, when Assange was holed up inside the Ecuadorian embassy, his internet was taken away for criticizing the treatment of the Catalan people and daring to tell the tale of their revolutionary referendum from Spain in 2017 when Spain responded by invoking article 155 of the constitution, which suspended Catalonia’s autonomy. Assange further stood with the elected Pro-Independence President, Carles Puigdemont, against his extradition to Madrid, tweeting that he would later have his internet privileges revoked, as Activist Post previously reported.

Assange also highlighted at the time that “in 1940, the elected president of Catalonia, Lluís Companys, was captured by the Gestapo, at the request of Spain, delivered to them and executed.”

Wikileaks editor @julianassange has been gagged and isolated by order of Ecuador's new president @Lenin Moreno. He cannot tweet, speak to the press, recieve visitors or make telephone calls. Ecuador demanded that he remove the following Tweet: https://t.co/uaDAEBKtwR

This is the same tweet that got Assange’s internet cut after Ecuador demanded he remove the tweet referencing foreign political prisoner Carles Puigdemont. Ecuador at the time claimed that Assange’s internet was cut “due to an alleged breach of an agreement to refrain from interfering in other states’ affairs.” WikiLeaks then stated in a tweet that Assange was never under a gag agreement, calling the allegations “entirely false.”

Assange highlighted the struggles of the Catalan people time and time again, including the attacks by police that referendum activists had to endure and the imprisoned Catalan prisoners who did nothing more than exercise their right to vote.

Bailey Lamon, Vice-Chair of Pirate Parties International, detailed the horror the Catalan people suffered just for voting for their independence from Spain, as well as the political prisoners imprisoned for daring to stand up for freedom.

“Voting day was met with police brutality as ballot boxes were confiscated, protesters were kettled and tear-gassed, and even elderly voters were beaten in the streets as they cast their votes. Many people were seriously injured and even arrested for exercising their right to free expression and engaging in the democratic process,” Lamon wrote.

Catalan voters drive back Spanish riot police trying to stop them voting today in the #CatalanReferendum for independence. #referendumCAT pic.twitter.com/ktF2Ec8npN

Now those same people are standing up for Assange just like he stood up for them during their October 2017 referendum.

On Sunday, an estimated 15,000 activists set out marching from Catalonia to Strasbourg (where they will meet with Pirates from Pirate Parties International) and are expected to march to Brussels in a few days. When the group arrives in Brussels they will be given a platform at the EU Parliament by Pirate Parties International Members of the European Parliament, (MEPS.)

Today, in Strasbourg, France, the Catalan activists will be given candles to participate in the Candles 4 Assange event, where they will march 15,000 strong around EU Parliament to the Gandhi statue, according to Anonymous networks within the hacktivist/activist collective.

Catalans are also demanding that Carles Puigdemont be recognized as their rightful duly elected legitimate President.

At the same time, the Candles 4 Assange event is happening globally, Courage Foundation/Defend WikiLeaks are running their own campaign for Julian Assange’s birthday, a photo collage dubbed #WeAreMillions.

Assange is facing extradition to the United States for 17 charges under the Espionage Act which were revealed. In total, Assange faces 18 charges including a charge under the CFAA for computer hacking by helping his source Chelsea Manning protect herself against being discovered, as Activist Post previously reported.

In other words, Assange is facing life in prison if he is extradited to the U.S. and found guilty in Virginia’s Kangaroo secret court — his only crime, publishing the truth.

Assange has called on WikiLeaks supporters to “save his life” in a recently published letter that was sent to journalist Gordon Dimmack.

To truly understand the mark Julian Assange and the WikiLeaks team has made on the world, watch this heart-wrenching video of Nobel Peace Prize Winner Mairead Maguire speaking on the imprisonment of her longtime friend Julian Assange during her acceptance speech for the GUE/NGL journalism award in his honor.

Supporters are asked to donate to the numerous defenses for WikiLeaks by visiting this link or purchasing merchandise from the WikiLeaks Shop, which goes towards Assange and other WikiLeaks volunteers’ defenses and future releases.

Now more than ever: Fight back against the US war on journalism #NoExtradition #FreeAssange

For up-to-date accurate information on Julian Assange’s plight, see @Wikileaks, @AssangeMrs, and @Unity4J and Assange’s lawyers Twitter accounts far too many to list, most notably the editor of Justice4Assange — @AssangeLegal. The Unity4J Twitter account will be up to date with information, live streams, and the Pinterest account will detail places where protests will be held in support of Julian Assange above and beyond his birthday.

Also, see the Candles4Assange account for further information on protests, the global movement to “stop the war on journalism.”

Happy birthday Julian Assange, cheers, from all of us fighting against your extradition and for a free press, thank you for sacrificing your freedom for our benefit.