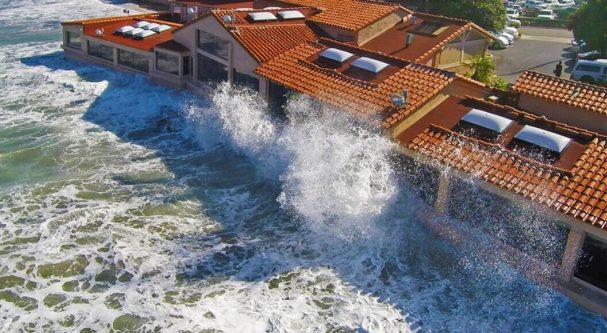 The wildfires that have taken their toll on California could be just the beginning of the state’s calamities. Now, the high tides of winter are coming and if those tides are worsened by an incoming storm, they could devastate entire cities on the coasts.

On December 10, the National Oceanic and Atmospheric Administration (NOAA) released a report stating there is an 80 percent chance of an El Niño event this winter. Such events are associated with wetter and more intense winter storms. However, NOAA does caution that its data are from September through November and the intensity of the El Niño will not be known for quite some time still.

Tides are determined by the sun and moon’s gravitational pull on the oceans. This warning from NOAA comes as heavy storms bear down on California’s Pacific Northwest.   In central and northern California on Monday,  waves were as high as 30 feet, with 40- to 50-foot breaks. Coastal flooding and erosion were reported. And sn even-more-powerful storm smacked the region yesterday, prompting flood watches, high-wind alerts, and winter storm warnings across nine states.

According to ABC News, holiday travelers along I-5, which runs north to south through Washington, Oregon, and California, can expect to be drenched with heavy rains. Although that storm has mostly passed and is headed to the Rocky Mountains, California is not out of the woods just yet. High surf warnings were issued by the National Weather Service from Point Conception, California, north of the Los Angeles  Basin, to the coast of southwestern Washington, highlighting an especially heightened threat to life and property within the surf zone, reported Weather.com.

This is what Noyo looked like this afternoon. pic.twitter.com/dre839M6J2

This new storm system comes just a week after a surfer was killed by big swells at San Francisco’s Ocean Beach. The waves that killed the surfer were only 10 feet high.  Should the tides interact with a storm of that magnitude, devastation on the West Coast would be imminent.