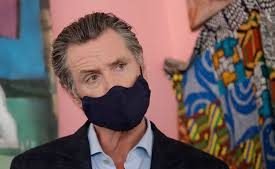 People in California are finally figuring out how blatant the oppressive tyranny they are allowing themselves to live under has been. Now that Joe Biden has been inaugurated, master Gavin Newsome has lifted the state’s partial stay-at-home order, permitting some dining and services to resume.

Many are accusing him of playing politics.  And it isn’t so much politics as he’s just doing to the slaves what masters do: bark orders and expect obedience or be punished.

Newsom announced the decision on Monday, a day after an official in his administration sent a letter to restaurant owners revealing the plan. All counties in the state will return to a tier-based system of restrictions, with outdoor dining and indoor salons allowed to reopen in ‘purple’ tier areas.

Newsom’s decision was met with cynicism by conservatives, who accused the Democrat governor of waiting until Joe Biden’s inauguration to lift the ban, now that the economic shutdown could no longer be used to hurt former President Donald Trump. -RT

People are finally getting it.  The rulers don’t care about you.  They want only power and control. It’s nice to see people realizing it, however.

Democratic leaders in multiple states have rolled back their coronavirus restrictions in the week since Biden took office. Michigan, Illinois, and Washington, DC all eased their virus-prevention measures in recent days. The lifting of some restrictions in California, however, means life for many is still oppressively restrictive.

Since they are worse off now then when they started the ban, regarding hospitalization- does this mean they don't trust the science anymore? https://t.co/drDYTOuKes

While hair and nail salons may now open, dining is restricted to outdoors, as are church services, according to a report by RT. Bars that serve only beverages must remain shut, and local officials have somehow given themselves the power over others to impose stricter regulations as they see fit. If you haven’t figured it out yet, government is slavery and it’s going to become much more apparent that we are living on a prison planet and have been for quite some time as 2021 rolls forward.