Caged Migrant Children Photo Goes Viral As Left Rages At Trump; Except It Happened Under Obama 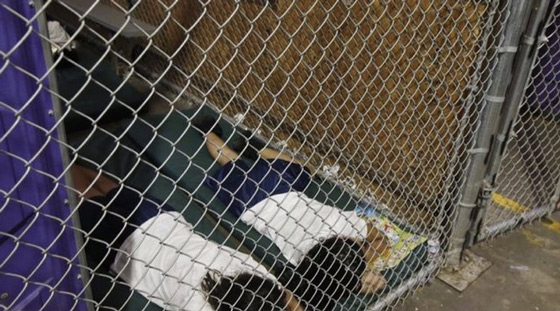 A photograph of two migrant children sleeping in a cage at an ICE detention facility quickly went viral on Sunday after several prominent liberals tweeted it in a white-hot rage at President Trump’s immigration policy.

After a laundry list of journalists and public figures angrily tweeted the photo – including CNN’s Hadas Gold, NYT Mag’s editor-in-chief Jake Silverstein, Obama speechwriter Jon Favreau and former LA mayor Antonio Villaraigosa, they deleted their tweets in shame when it emerged that the photo was taken in 2014, under Obama.

Indeed – nobody thought to check the date on the attached article, published in June of 2014.

The award for the lamest excuse goes to CNN’s Hadas Gold, who wrote “Deleted previous tweet because gave impression of recent photos (they’re from 2014)”

No you did not “give the impression”. You flat out said it. pic.twitter.com/kGJ2PmPVgT

Jake Silverstein, editor-in-chief of NYT Magazine, threw his family under the bus for “distracting” him.

Correction: this link, which was going around this morning, is from 2014. Still disturbing, of course, but only indirectly related to current situation. My bad (and a good reminder not to RT things while distracted w family on the weekend). https://t.co/zbM4I0woUF

Obama speechwriter Jon Favreau cranked up the virtue-signaling up to eleven, tweeting “Look at these pictures. This is happening right now, and the only debate that matters is how we force our government to get these kids back to their families as fast as humanly possible.”

Aaand it’s gone – but not forgotten:

I don’t know what’s worse… Obama’s speech writer self-owning himself by sharing an article dating back to 2014 under Obama or him deleting his tweet showing that he doesn’t actually care about the kids and just wanted to dunk on Trump pic.twitter.com/98SBJEXeot

Former LA Mayor Antonio Villaraigosa also had egg on his face after tweeting “Speechless. This is not who we are as a nation.”

Hello @antonio4ca Why did you delete this tweet? Is it because this was 2014 and you are no longer outraged because who this all happened under? Are you no longer speechless? Help explain, thanks. pic.twitter.com/Qe8Pr9Zac1

As Caleb Hull – Senior Editor of The IJR and others pointed out, many of those who tweeted the picture on Sunday were awfully silent when it actually happened under Obama.

A lot of big names are sharing this article from 2014, but they didn’t say a word back when it actually happened under Obama.

That a lot of journalists did not recognize those pictures from the unaccompanied minors surge in 2014 and shared the story assuming it depicted a new practice under Trump seems like pretty clear evidence that they didn’t do their jobs during the Obama years.

Of course, then there was the inevitable…

The US economy has been destroyed since 2016. Don’t believe me? Just look at this unemployment line. Thanks Drumpf pic.twitter.com/gfbUByPuf1

We will never forget him leading the Trail of Tears. pic.twitter.com/SrwqGcEHFp

This one is too good. This tweet is now deleted. Senior Obama bro wanted to blame the current administration for this only to realize it’s from his own administration. pic.twitter.com/I86zPyeIbm