By Decree Of The King: “There Are Some Steps That We Can Take That Don’t Require Legislation” 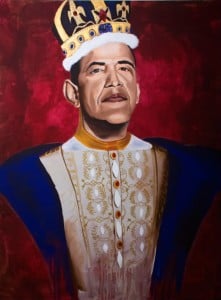 President Obama, much like his predecessors, has implemented scores of policy changes by way of Executive Order, a legal technique that allows the Commander-In-Chief to delegate legislation that, just like a bill passed in Congress, has the full force and authority of law.

Presidents have used executive powers to delegate authority over all sorts of issues since Abraham Lincoln first used this Executive power to mobilize troops against rebels operating in southern states. Franklin Roosevelt declared the possession of gold illegal by way of executive order in the 1930’s. A recent order by President Obama authorizes the seizure of farms, energy resources and skilled laborers in the event of a declared national emergency. An order authorizing the use of force and war in Kosovo was issued by President Bill Clinton in 1999.

Thousands of such orders have been issued, with President Obama having signed 144 of them so far during his first term.

But, arguably, there will be no Executive Order as significant and impactful as the one the President is promising to implement next.

According to assessments by Vice President Joe Biden and President Obama, they believe they have the authority to utilize this Constitutionally provided method of decree with respect to Americans’ right to bear arms:

My understanding is the vice president’s going to provide a range of steps that we can take to reduce gun violence.

Some of them will require legislation, some of them I can accomplish through executive action.

And so I will be reviewing those today, and as I said, I will speak in more detail to what we’re going to go ahead and propose later in the week.

But I’m confident that there are some steps that we can take that don’t require legislation and that are within my authority as president, and where you get a step that, has the opportunity to reduce the possibility of gun violence, then i want to go ahead and take it.

They may not have the ability to outlaw firearms, but you can bet they are exploring every legal loophole possible to restrict access to semi-automatic weapons (handguns and rifles), the acquisition of ammunition, and the private sale of guns and accessories between individuals.

THIS IS GOING TO HAPPEN.

Our only hope once done is that the Supreme Court will quickly move to reject the President’s decrees.