Building An Igloo Alone: “Survive In Ice and Snow” 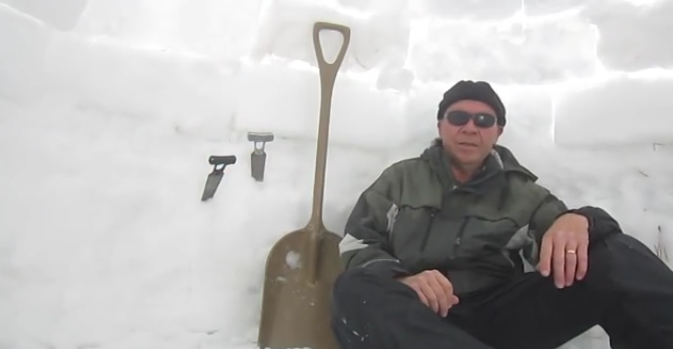 OK, I know it isn’t anywhere near winter, and there aren’t many people reading this site who live in or even visit the remote tundras of the extreme north and south of this planet.

However, I find it fascinating how people have figured out how to survive and thrive with next to nothing.

Shaping an igloo out of blocks of ice cut from the snow covered surface is a great example, and has many survivalist and SHTF applications for those who find themselves in extreme climates. Besides that, it is just cool.

This man shows how it can be done by anyone – even alone:

Traditional development of igloos by Inuit tribes migrating across a vast frozen wasteland no doubt followed a formative conversation sometime early on addressing how desolate was their setting, and how little there was to work with.

“But we have nothing but snow and ice.”

“Then we shall build with ice and snow.”

And so the idea occurred to someone that with nothing else around, the ice itself offered a valuable resource as protection against the blinding winds and extreme conditions of the area. Clearly, it was born out of necessity, but became beautifully mastered over time.

Surrounded by little else, the stuff itself offered insulation, warmth and shelter. And with it, a way of surviving for people in harsh environments.

How the careful crafting of this snow and ice turns around into a secure yet temporary,  and if desired, long-term location is no small wonder. Nature had to be reverse engineered.

The principles of construction are as solid as any other building material, and the practical use by man with only limited tools is nothing short of miraculous.

If nothing can be simply and skillfully transformed into life supporting stuff there, then it can be done anywhere.

Here’s a video showing it in timelapse:

Has anyone here actually tried to build one?

The Prepper’s Blueprint: This is the Code to Live By In Order to Survive Anything

“Simple Offers Freedom”: Building a $500 Cabin Without a Permit