Bringing WiFi Connectivity To Your Off Grid Home: “We Can Do It Ourselves” 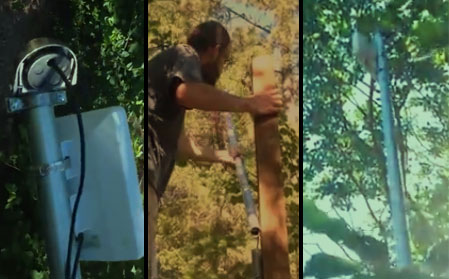 This off grid couple faced a dilemma – their hard earned sustainable life is supported by income earned from the Internet, yet they worked so hard to get away from it all.

Until they figured out this solution, they were driving back to civilization several times a week to work in cafes and other access points.

Now, Nick and Esther have connected with a rural wifi provider using a line-of-sight pole mounted with a wireless receiver. Ethernet cable is then run underground into their off grid home.

While the technological solution isn’t exactly purist for homesteaders, it reflects a practical way in which more and more rural people will be able to keep in touch with the Internet while living the off-grid, homestead or prepper lifestyle that they have worked to so hard to create and sustain.

Several rural communities in Europe and the United States have begun creating their own Internet service, allowing autonomy and self-reliance with web access in areas that most ISPs see no corporate benefit from providing service to.

I covered some of these in the 2013 post: Meet The Meshnet: A New Wave of Decentralized Internet Access

Faced with a local ISP that couldn’t provide modern broadband, Orcas Island residents designed their ownnetwork and built it themselves. The nonprofit Doe Bay Internet Users Association (DBIUA), founded by Sutton, Brems, and a few friends, now provide Internet service to a portion of the island. It’s a wireless network with radios installed on trees and houses in the Doe Bay portion of Orcas Island. Those radios get signals from radios on top of a water tower, which in turn receive a signal from a microwave tower across the water in Mount Vernon, Washington.

Faced with CenturyLink service that was slow and outage-prone, residents gathered at a community potluck and lamented their current connectivity.

“Everyone was asking, ‘what can we do?’” resident Chris Brems recalls. “Then [Chris] Sutton stands up and says, ‘Well, we can do it ourselves.’”

The future may look pretty bleak in most respects, but if the system doesn’t totally collapse, America may see a worthwhile resettlement and resurgence among some very bright and determined freedom lovers who will understand that technology of the present and future must serve the needs of individual freedom and survival without the need for government.

There are several new and exciting alternatives for off-the-grid and rural people that is becoming feasible to implement – particular in group or community settings.

Even if Internet access itself is not maintained in the event of a severe grid-down scenario, the spirit of resilience will pay off in skills, problem solving and mutual support for a community that has figured out these type of solutions.

The Creator of This Amazing Internet Privacy Device Has Been Silenced: “Effective Immediately We Are Halting Further Development”