Blood Of The Innocent: Despite Promises, U.S. Continues To Kill With Impunity 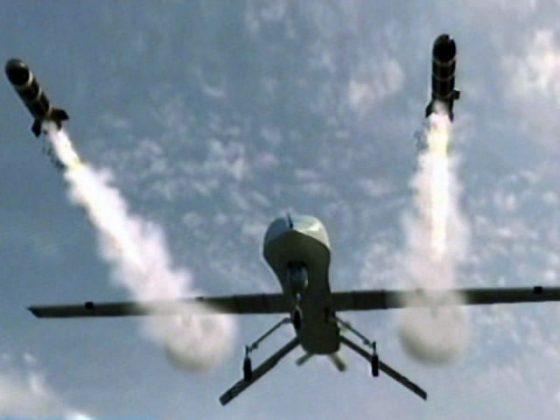 In spite of president Donald Trump’s promise to cull the unnecessary wars that the United States is constantly involved in (or starting), they continue to use tax money to kill civilians with impunity. The blood the U.S. continues to spill is often that of innocents, such as civilians and children.

War is a racket. It always has been, and in the U.S., it enriches the political elites as innocents die overseas.  Far too many Americans have become far too comfortable with the killing being done in their name.  According to RT, the Trump administration has not only expanded the U.S.’ covert and lethal drone program but has taken the covering up of its civilian death toll to a whole new level.  For an administration claiming to be “pro-life,” this new revelation should be incredibly disturbing to everyone.

Like most of the battlefields opened more widely under the Obama administration, Donald Trump ramped up airstrikes against the infamous Al-Shabaab terrorist group in Somalia approximately two years ago. But at least Obama never claimed to be pro-life.  He was pretty open about his disregard for others. And, like most drone wars expanded under Obama and dramatically widened under Trump, the details of this covert assault are continuously swept under the rug, particularly when it comes to civilian casualties.

The Pentagon has openly said that its airstrikes in Somalia have killed zero civilians.

Yet, recently, an Amnesty International investigation into just five of the strikes carried out since March 2017 by both manned and unmanned Reaper aircraft found that the strikes resulted in at least 14 civilian deaths, with instances of eight civilian injuries as well. In total, the US has carried out more than 100 strikes in Somalia since 2017. –RT

Lying by governments to further wars is nothing new and no one should expect that it stop. The U.S. as a country is wholly obsolete if they cannot bomb and kill with impunity. The source of their power is the massive military-industrial complex they hold over the heads over everyone on the planet – including their own citizens. (This is seen daily as everyday Americans thank the troops for killing and following the orders of the political elitists without asking questions. In fact, it’s “un-American” to question the wars and those actually spilling the blood on foreign soil.)

Amnesty International has made it quite clear that these attacks have violated international humanitarian laws and may amount to war crimes (remember, they have only assessed five out of over 100 so far). Regardless of this, American media outlets won’t report the fact that the government is slaughtering people. The New York Times appeared to be protecting their “drone king” Barack Obama by failing to mention that he was also a murderer who committed war crimes and violated the most basic of human rights – the right to live.

In just the first few months of 2019 alone, the U.S. military has already carried out 24 strikes on Somali territory, compared to only 14 in the whole of 2016, prior to Trump taking office. In 2018, US airstrikes killed 326 people and yet, not a single civilian has died or been injured if you ask the government.

Just recently, Trump allowed the CIA to keep secret how many civilians are killed in its airstrikes outside of war zones. As it transpires, a law passed by Congress making it compulsory for the Pentagon to publicly report civilians killed in its operations applies to the Pentagon only, and not the CIA drone program.

The law is pointless anyway when one considers how the Pentagon assesses whether civilians have been killed or not. Donald Trump’s relaxation of the rules surrounding airstrikes are in and of themselves a pathway to a war crime tribunal. According to a retired US brigadier general who was consulted by Amnesty, Trump’s executive order widened the list of potential targets to include adult males living in villages sympathetic to Al-Shabaab who are located within range of known fighters. This was already a known tactic under the peace-prize-winning president Barack Obama, who counted all “military-age males” in the vicinity of a target as militants. –RT

The U.S.’ laws have become increasingly pointless over the past few decades.  That goes for all their laws – both to try to control the military and to exert control over the people.  Someday, people will realize laws are nothing more than commands written by ink on paper by men andwoment generally considered to be crooks and liars. Once the vast majority figures this out, the wars and violence and hatred against others will cease as government power dwindles.