Blood In the Streets: Turkey Explodes In Violence (**Graphic Content**)

Editor’s Note: Coming soon to a neighborhood near you. These protests reportedly erupted a few days ago when activists staged a sit-in at a local park. Now there are thousands of Turks in the streets, hundreds arrested, and scores brutally beaten. So much so, that there are literally pools of blood flowing through the streets. It only takes a seemingly innocuous catalyst for all hell to break loose. These people aren’t being motivated because a park is being razed for commercial purposes. The resentment and anger goes much, much deeper than that.

Report Contributed by The Daily Sheeple: 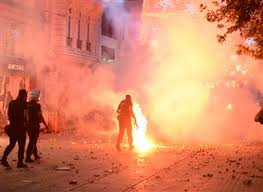 Turkey is entering its third day of violent protests as police have withdrawn from Taksim Square and allowed the mass protests to continue.

Over 900 people have been arrested across Turkey for what the authorities called a security measure.

The first photo below was taken from a CNN IReport that CNN themselves have not vetted.

Blood in streets near Taksim Turkey 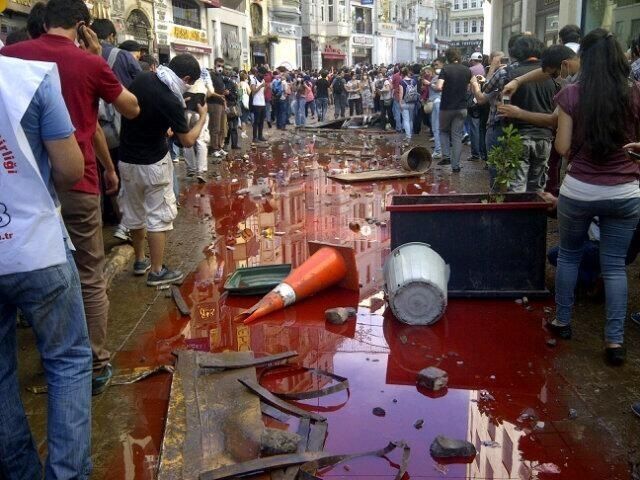 A shocking video report from RT shows violent clashes between police and protesters:

An RT article covered various aspects of the protests including how they started and what they stand for:

Police in Istanbul have withdrawn from Taksim Square, allowing the mass protest to continue unabated, Turkish media report. Istanbul and Ankara are entering the third day of violent protests, with tear gas and water cannon deployed and over 900 arrested.

Minor scuffles broke out after protesters lobbed fireworks at officers as they were drawing back, the state-run Anadolu Agency reports. Police removed barricades around the square, located in the heart of the city, which had previously been erected to prevent the anti-government protests, Private Dogan news agency said.

Despite the authorities decision to allow tens of thousands to flood onto the square, the main subway gateway to Taksim, the central station in the city’s metro network, has reportedly been shut down in an effort to keep more people from reaching the ongoing protests.

In the capital, Ankara, security forces battled with demonstrators who had amassed at a park near Prime Minister Recep Tayyip Erdogan’s office. Rallies have also been staged in the cities of Bodrum, Konya and Izmir.

Protestors take care of an injured demonstrator during a demonstration in support of protests in Istanbul and against the Turkish Prime Minister and his ruling Justice and Development Party (AKP), in Ankara, on June 1, 2013 (AFP Photo / Adem Altan)

“Police were there yesterday, they’ll be on duty today and also tomorrow because Taksim Square cannot be an area where extremists are running wild,” the PM warned.

In two days about 939 people have been detained across the Turkey as part of “necessary security measures,” Turkish Interior Minister Muammer Güler said. Police use a water cannon to disperse protestors near the Taksim Gezi park in Istanbul after clashes with riot police, on June 1, 2013, during a demonstration against the demolition of the park (AFP Photo / Gurcan Ozturk)

Many have wondered how the protests originally erupted and the answer to that question is that it apparently started after dozens of activists decided to attempt a sit in at a park that was set to be destroyed for commercial use.

After the police became overzealous and clearly attacked peaceful protesters, many other people within Turkish society joined their ranks.

On Monday, several dozen activists tried to stage a sit-in in Gezi Park, the last area of green space left on Taksim Square, after several trees were torn up to make way for a commercial redevelopment.

Erdogan dismissed the small protest on Wednesday, saying authorities would go ahead with the plan, which entails the construction of a replica Ottoman-era barracks that could house a shopping mall or apartments. Protestors run away from tear gas at the Taksim Gezi park in Istanbul after clashes with riot police, on June 1, 2013, during a demonstration against the demolition of the park (AFP Photo / Gurcan Ozturk)

The heavy-handed tactics deployed by police have been viewed by demonstrators as a sign of the government’s increasingly authoritarian bent, with the park demonstration turning into a broader, nationwide protest against Erdogan’s government.

Similar demonstrations have flared up around the country despite a court decision to temporarily halt demolition of the park.

Erdogan said that the Turkish Interior Ministry had launched an investigation into the use of excessive force by security forces. In a televised speech, the Turkish PM said police may have used tear gas excessively during their confrontation with protesters, although he insisted they did not represent the majority and were responsible for raising tensions.

However, protesters have countered the claim, saying the violent police crackdown is to blame for the recent unrest.

“This started simply as a peaceful sit-in to save a park, but it’s become one of the worst state attacks on protesters in recent memory — and a frightening example of the Turkish government’s growing eagerness to crack down on its own citizens,” an online petition demanding that Erdogan “End the crackdown now!” reads.

“The security forces have been individually targeting protesters to terrify, wound and kill us. 12 people have already suffered trauma injuries from gas canisters — one man died of heart attack, and hundreds are suffering from excessive gas inhalation,” it continues. Riot police use tear gas to disperse the crowd during an anti-government protest in Istanbul June 1, 2013.(Reuters / Murad Sezer) A woman opens her arms as police use a water cannon to disperse protestors on June 1, 2013 during a protest against the demolition of Taksim Gezi Park in Istanbul (AFP Photo) Tear gas surrounds a protestor holding a Turkish flag with a portrait of the founder of modern Turkey Mustafa Kemal Ataturk as he takes part in a demonstration in support of protests in Istanbul and against the Turkish Prime Minister and his ruling Justice and Development Party (AKP), in Ankara, on June 1, 2013 (AFP Photo / Adem Altan) A protestor flashes a victory sign as he takes part in a demonstration in support of protests in Istanbul and against the Turkish Prime Minister and his ruling Justice and Development Party (AKP), in Ankara, on June 1, 2013 (AFP Photo / Adem Altan)

Stay tuned as we will continue to monitor the increasingly violent situation in Turkey and bring any updates as they become available.

Related: The Day the People of Turkey Rose Up