Bigger Than Solyndra: Over Half a Billion in Customer Funds Disappear Under Obama’s Top Wall Street Finance Man

Making news in the last few days is the collapse of MF Global, one of the handpicked elite primary dealers that serve as trading counterparties of the New York Fed in its implementation of monetary policy. Primary dealers are supposed to be heavily regulated and monitored, as they are required to participate in Treasury auctions. As of October 31, there were 21 primary dealer club members including the likes of behemoths that include JP Morgan, Citigroup, Goldman Sachs, and Morgan Stanley.

What you may not know about MF Global and why it is important is that they are not only a primary dealer, but also a broker-dealer, which means they trade securities on behalf of their customers. Yesterday, they filed for bankruptcy, making them the 8th largest bankruptcy in U.S. history, to the tune of $40 billion.

It turns out that as of this morning, there is about $700 million of customer funds that have disappeared.

The recognition that money was missing scuttled at the 11th hour an agreement to sell a major part of MF Global to a rival brokerage firm. MF Global had staked its survival on completing the deal. Instead, the New York-based firm filed for bankruptcy on Monday.

Regulators are examining whether MF Global diverted some customer funds to support its own trades as the firm teetered on the brink of collapse.

The discovery that money could not be located might simply reflect sloppy internal controls at MF Global. It is still unclear where the money went. At first, as much as $950 million was believed to be missing, but as the firm sorted through its bankruptcy, that figure fell to less than $700 million by late Monday, the people briefed on the matter said.

A few weeks ago, Ulsterman’s Wall Street Insider suggested that there would be more Obama administration scandals similar to Solyndra, as well as hinting that Wall Street funding for the President’s 2012 election was drying up.

Based on what’s happening with MF Global, it looks like he was right.

You see, MF Global is headed by none other than Jon Corzine who served as governor of New Jersey (2006 – 2010) and is a former CEO of the investment bank affectionately known for Doing God’s Work, Goldman Sachs.

Perhaps just as important as Corzine’s résumé are his direct ties to the Obama administration, pointed out by Karl Denninger:

The beleaguered president has recruited former Goldman Sachs head honcho Jon Corzine to shore up re-election funds from the banking industry, which is furious over Obama’s financial regulations.

Corzine, the former governor of New Jersey who was blasted out of office by Republican Chris Christie in 2009, has attended secret meetings with the president and has been working on Obama’s 2012 campaign for months, The Post has learned.

The Democrat, who now leads Manhattan-based brokerage MF Global, has been tasked with scraping up the very little banking-industry support Obama can still get. 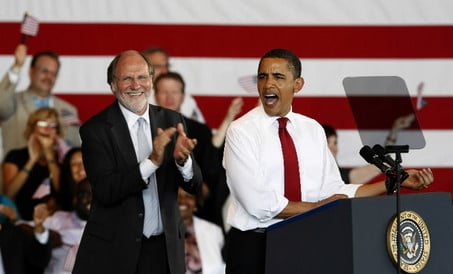 Thus we have an elite primary dealer, headed by a former democrat governor who once ran one of the most despised firms in America and who is now the front man for President Obama’s Wall Street financing campaign, running a firm that disappeared $700 million in customer funds and declared the 8th largest bankruptcy in U.S. history… and we’re supposed to believe there was no political machinations behind the scenes to make MF Global a primary dealer in the summer of 2010 and that somehow regulators at the SEC, CFTC and the New York Fed missed it, and that President Obama in no way influenced the decision making process?

Denninger sums up the broader implications:

You cannot trust ANY balance sheet given to you today — in point of fact the government itself demanded that FASB allow lies as a business practice when it comes to the alleged value of securities.  It’s that simple.

It is a mark of a feudal system where outright looting is not only permitted it is encouraged.

There are no checks and balances and the banksters wield their briefcases like John Dillinger wielded his tommy gun.  There has been no reform since 2008. Dodd-Frank was a joke, Glass-Steagall was not put back in place, and there was no prosecution of those who did wrong.

And now we have another collapse that appears to show that there is no regulation, there is no oversight and nobody in the government gives a damn when one of the primary dealers that the government charges with making an orderly market in Treasuries appears to have co-mingled more than half a billion in customer funds with their own trading book.

This game is nearing its forced conclusion and you’re not going to like it.

Our political, monetary and financial systems are totally corrupt, and in the case of MF Global, like Solyndra, the President of  the United States and his regulatory agencies were complicit in the scam in one capacity or another.

It should be quite obvious to anyone paying attention – and we guarantee you it’s obvious to customers of MF Global – that bankers, politicians and the elite, who live by their own set of rules which amount to nothing short of complete lawlessness, couldn’t care less what happens to the 99%.

Our system is coming unglued because of precisely these reckless actions in the upper echelons of our government, financial institutions and regulatory agencies. If they are willing to wipe out GM bond holders, Solyndra investors, and MF Global customers, what do you think they’ll do to your 401k’s, savings accounts, pension funds, and purchasing power?

This is financial and socioeconomic terrorism, plain and simple, and all of the evidence suggests it is state-sponsored.