Biden to China: “You ARE national affairs”

Well known comedian and Vice President of the United States Joe Biden, on a good will trip to the world’s largest creditor, joins his Chinese counterpart this week  in an effort to build positive relations and quell any suggestion that the US may default on its debt.

While it is rarely ever discussed in public, and often downplayed as a non-issue, we can be wholly assured by Vice President Biden’s recent exchange with Chinese VP Xi Jinping that China, our national debt and game theory surrounding it is the talk of the Treasury and administration behind closed doors:

On Thursday, China’s vice president and likely leader-in-waiting, Xi Jinping, met Biden at the Great Hall of the People.

“Good to see you again,” Xi said. “I know you are very busy with national affairs at home.”

“You ARE national affairs,” Biden told his counterpart from the United States’ largest creditor.

While we spend trillions of dollars on projects like President Obama’s health care overhaul, so-called jobs initiatives, funding mechanisms for too-big-to-fail institutions, and a host of other programs, Mr. Biden’s suggestion that China is the key national concern is very telling.

In front of the mainstream public the Obama administration has worked very hard to make sure our perception of the progressively rising national debt is one of indifference and unconcern. In a recent interview, chief borrower Tim Geithner downplayed any possibility that the US may be close to maxing out the credit card:

“They’ve been very strong and I’m sure they’ll be strong investors in the U.S. going forward,” he said today, according to the transcript of an interview with NBC television. “I’m very confident in that.”

Mr. Geithner, who was also extremely confident in April of 2011, said at the time that there was “no risk” that the United States would lose its Triple ‘A’ credit rating. We know how that prediction went.

Obviously, what is released as our official position and policy publicly is much different than what is actually the case behind the scenes.

Within this context, Vice President Biden’s comments to the Chinese VP should be a warning sign of how serious of a situation this is.

While we’re not suggesting that China will outright stop purchasing US Treasuries in the immediate future (though, you never know), it’s clear that the Chinese are already moving to diversify their $3 Trillion US debt holdings (yes, it’s $3 trillion not $1T as is broadly reported) on worries that the US will continue to exponentially increase national debt, inflate the monetary supply, and recklessly mismanage government spending.

The Chinese know that they will never be repaid and any informed American knows this to be true, as well. China is the “national affair” not because we ever have any intention of making good on our debt, but because the administration, Treasury and The Fed are trying to figure out how to keep the credit extensions coming through Chinese treasury purchases.

Our government has no intention of changing anything; the machinations of the last three years should make this crystal clear. All we are concerned with at this point is extracting as much money from the Chinese, Russians and other creditors as possible so that we can continue to kick the can down the road.

This will, of course, end very badly. The U.S. will be left with two choices: either default, or print the debt away. Does anyone think the Chinese don’t know how this story will play out?

That being said, contrary to the opinion of many other analysts and pundits, we suggest that China will eventually pull the plug. They, too, are war gaming these scenarios. It is likely the Chinese are biding their time, waiting for the perfect opportunity to strike:

To secure ourselves against defeat lies in our own hands, but the opportunity of defeating the enemy is provided by the enemy himself.

-Sun Tzu
The Art of War

Do not mistake their (or Russia’s) willingness to lend us billions upon billions of dollars as friendship, because as Sun Tzu said, “all warfare is based on deception.”

We fully realize that the minute China decides to take the US off life support their economy will completely collapse, as will the economies of the rest of the world. But the Chinese are not short-term global players – they never have been. They strategize over periods of decades and generations, which means that ten or twenty years of economic strife would likely be an acceptable result if they can permanently crush the economy of the world’s current and only “super power.”

As communists the Chinese are staunch believers in peace. But, peace as defined by a communist, means that all other nations must also be communist. This is war, and it is our belief that the Chinese are fully prepared to sacrifice their existing economy to ensure “peace” for years to come.

The next Great War, as forecast by the likes of Gerald Celente, is happening before our eyes. No missiles have been fired yet, as the battlefield exists in financial markets, monetary policy, geographic resource acquisition and psychological programming of the populace of both our countries.

But, we would be remiss if we failed to point out that debt collapses have, throughout history (i.e. Rome, collapse of the South’s economy circa 1860, Europe in the 1930’s) led to widespread military conflict.

Perhaps the recent meeting of East vs. West on a Chinese basketball court while Mr. Biden was in-country is but an omen of things to come. 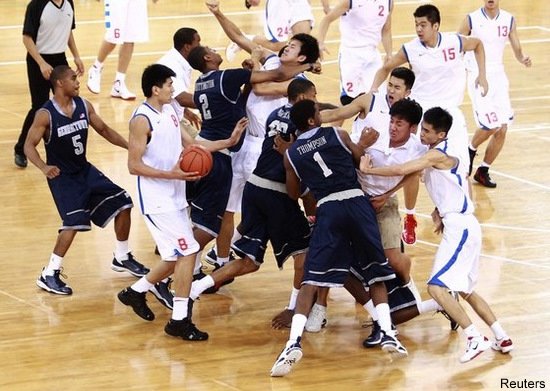