Before You Liberals Freak Out About Trumpmaggedon: Hillary Clinton Called For Direct Strikes On Syrian Airfields Hours Before Trump Launched Missiles 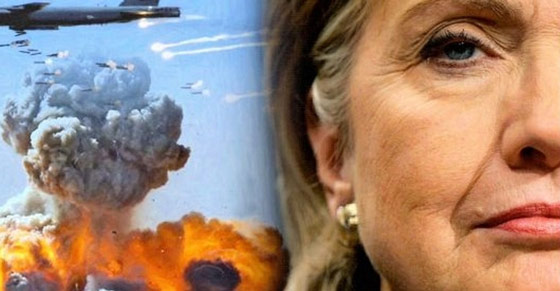 With Russian warships now moving towards U.S. Navy Destroyers off the Syrian coast, liberal supporters of Hillary Clinton are freaking out about the possibility of a Trumpmaggedon nuclear war.

Before pointing fingers at President Trump, however, it is important to note that just hours before Trump launched missile strikes against Syrian airfield targets it was none other than Hillary Clinton herself who said she would have done the same thing:

Speaking to the New York Times columnist Nicholas Kristof, Mrs Clinton said she believed the US had been wrong not to have previously launched such an offensive.

She said: “Assad had an air force, and that air force is the cause of most of the civilian deaths, as we have seen over the years and as we saw again in the last few days.”

“And I really believe that we should have and still should take out his airfields and prevent him from being able to use them to bomb innocent people and drop Sarin gas on them.“

Let’s not pretend that Donald Trump did anything Hillary Clinton wouldn’t have done.

If Trump’s Syrian strikes lead to further tension between the United States and Russia, or even widespread military conflict, it has nothing to do with a Republican or Democrat being in office, but rather, a pre-planned agenda.

As Ron Paul highlighted this week, it’s the neo-cons who benefit most, and that includes Hillary Clinton.

“Beyond A Red Line”: Trump May Be Fighting Several Disastrous Wars Simultaneously