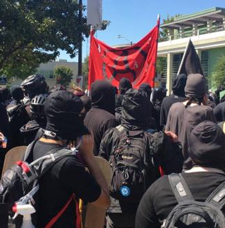 This report was originally published by Tyler Durden at ZeroHedge.com.

After the media lashed out at right-wing extremists in the aftermath of the tragic violence in Charlottesville, the tide now appears to be turning against the all-black-clad “Antifa.”

For the first time since the campaigns began late last year and protests broke out, The Washington Post unleashed this shocking headline.

Jumping over plastic and concrete barriers, the group melted into a larger crowd of around 2,000 that had marched peacefully throughout the sunny afternoon for a “Rally Against Hate” gathering.

Shortly after, violence began to flare. A pepper-spray-wielding Trump supporter was smacked to the ground with homemade shields. Another was attacked by five black-clad antifa members, each windmilling kicks and punches into a man desperately trying to protect himself. A conservative group leader retreated for safety behind a line of riot police as marchers chucked water bottles, shot off pepper spray and screamed, “Fascist go home!”

All told, the Associated Press reported at least five individuals were attacked. An AP reporter witnessed the assaults.

Berkeley Police’s Lt. Joe Okies told The Washington Post the rally resulted in “13 arrests on a range of charges including assault with a deadly weapon, obstructing a police officer, and various Berkeley municipal code violations.”

But it’s not just WaPo that is exposing some truth. Well known Bay Area TV personality, Frank Somerville – KTVU anchor – took to Facebook this weekend to explain what happened to him when he took a day trip to Berkeley.

Before he starts, he notes…

If people dont want to hear the truth thats not my problem. I have no agenda. Im just saying that this is what happened to me today, think about it. And make your own decision.”

I experienced hate first hand today… It came from these people dressed in all black at a protest in Berkeley.

Ironically they were all chanting about NO hate.

I was watching them and taking it all in. I came there on my own time. Because I wanted to see things first hand. I was dressed in shorts and a tank top.

At one point I took out my phone to take a picture. And that’s when it all happened. (And just to be clear they were playing for the cameras in front but I was toward the back. And since there were already so many people taking their picture I didn’t think it would be an issue.)

I took these two pictures and afterward they started screaming at me. I thought for sure they were going to attack. I was just waiting for it. I wasn’t scared.

But I stayed calm even though I thought this may not end well for me. Here’s how the conversation went (and as you’re reading this keep in mind that they were yelling at me and their words were filled with venom, anger, hate and intolerance.)

There’s just no other way to describe it. I was stunned.

Them: Hey! No pictures or we’ll take your phone!!! (At that point I’d already taken these shots)

Me (In calm voice): You’re on public property and I can take a picture if I want to.

Them: Oh so you’re a big man with a camera?

Me: No I just wanted to take a picture and talk with you.

Them (rushing toward me): We outnumber you and we will take your camera!

Me: I’m not trying to do anything. I just want to try to understand and have a respectful conversation.

Them: We’ll block your shot!!!

Me: That’s fine. All I wanted to do was have a conversation.

Them: Now is not the time. (In fairness he was the one person who was respectful)

I walked away stunned. I grew up in Berkeley. I marched in anti-war protests during the sixties.

Its one thing to read about HATE, It’s another thing to be right next to it.

In my opinion, these people dressed in black are just as hateful and intolerant as the people they are protesting against.

Afterward I was talking to several other protesters. (Not dressed in black)

And I agree. MOST of the people out there today in Berkeley were non-violent.

They were there for the cause. They just wanted to come out and stand up against hate. I totally support them. But I do not support extremists, whether they are on the right or the left.

Hate is hate. And I experienced it first hand today. It was sad to see.

The commenters, as one would imagine, were very diverse in their opinions about Somerville’s story, but the cognitive dissonance seems immense…

Niki D’Amore That’s not hate. They were prepared for battle. They’re fighting for your daughter’s rights, for my rights. They had a preconceived notion of the kind of man you are, based on your whiteness, and the way you were dressed. Is their presumption of you ok, absolutely not, but we’re in the midst of a revolution, at a turning point, and some people expect you to pick a side. This wasn’t hate. It was anger.

Tommy Salami That’s it. I’m done with you, Frank. Did you see Inglorious Basterds? Schindler’s List? Hell, Indiana Jones? Were you confused about who the bad guy was? You wandered into a literal battlefield dressed like a Summer tourist and tried to have a conversation? What on Earth is wrong with you?

Bob Demello How do we know they were not far right hater’s there to make peaceful protesters look bad?

Eric Anderson Surprising to hear you taking a political position and agreeing with our President’s statement regarding violence from many sides. Equivocation between fascists and anti-fascists is a core strategy of the alt-right.

Somerville was careful to respond to each assertion, and summarized as follows…

There have been a lot of people leaving comments about me where they completely disagree with me. and that’s totally okay. to the discussion that’s so important. We all see life thru a different lens. What I described today was what I saw they MY lens. But I also want to see things thru your lens whether I agree or disagree with you. That’s how we learn. So thank you for your comments whether you argree with me or whether you vehemently disagree with me.

Sticking your neck out and reporting truth is anathema in this new normal, we hope, as his wife suggested, he is not crucified; however, we suspect, given the bias in the Bay Area, he may well be.

And as an aside, here is Somerville’s daughter with her two best friends…

A couple of final thoughts…

For all the media worries that Trump is inciting violence against journalists, the only group consistently assaulting reporters is Antifa

Texas is showing us the best of America.

California is showing us its ass.

Man walking to grocery store in Berkeley mistaken for being a Nazi is beaten into a coma. pic.twitter.com/pFpHhSKasi

This report was originally published by Tyler Durden at ZeroHedge.com.